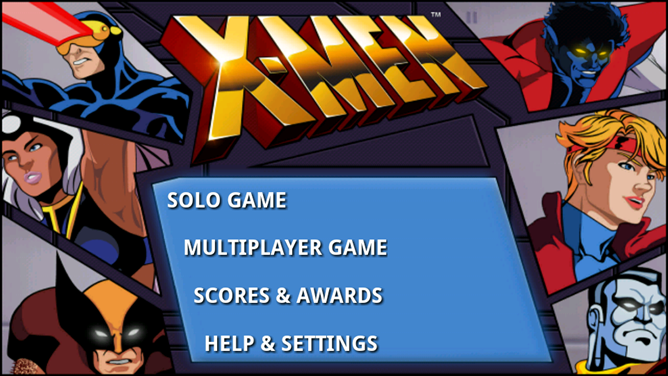 Android recently got their hands on a mobile port of the game, this time using touch controls instead of the ol' joystick. Players will choose one of six heroes (Wolverine, Cyclops, Storm, Nightcrawler, Dazzler or Colossus) and mash the "punch" button on their way through a number of unique levels.

Villains from the comic make their appearances as end bosses, usually with really horribly-translated quotes, like "Pyro will turn you to toast!" and "I am Magneto, master of magnet!" This was part of the camp appeal of the game, and for its continued appreciation in beat-em-up circles.

Thankfully, you're given the option of a stage select before you choose your character; this eliminates the quarter-draining practice of making you start from the beginning every time you play. This is one of the many mobile-friendly mechanics that were added to the emulation, like high-resolution portraits to the characters and an updated menu screen.

Actions are pretty simple: you've got a "punch", "jump" and "mutant power" to choose from. Jumping's a bit tricky to get ahold of, and it seems that jump attacks are rarely effective. However, this game introduced some novel concepts to the arcade: you can stomp enemies while they're down, throw them, perform multiple-hit combos and backwards attacks. These all carry over to the mobile version.

Controls are handled through on-screen buttons, which work fairly well. They're responsive and work well with multi-touch, but sometimes I find that it's much too easy to hit the "mutant power" screen-clearing attack when I want to hit the "punch" button. The d-pad could definitely have been replaced by a joystick for more precision controls, but it performs well enough once you get the hang of where the boundaries of touch are.

As these arcade games are primarily made for (and mostly impossible to complete without) multiplayer, Konami has included a multiplayer mode which allows up to four players play together. However, all players need to be on one Wi-Fi network; they'll then join one player, who acts like a host. I sadly didn't get a chance to try this out, but I'm optimistic about multiplayer over a local network.

To be honest, I'm surprised they even included multiplayer at all. I've seen a lot of ports that fall into the "cash in" territory, but this game really feels like they've made an effort. It really gives me the feeling of Street Fighter II: HD Edition for the Xbox Live and PSN systems: while they didn't re-draw everything, the updates they have made bring things up to speed. It's nostalgic without being impractical.

As far as emulation goes, X-Men actually plays quite well. There's the option of playing in 4:3 or 16:9 resolutions (which stretches the screen a bit), but both modes look great on my Atrix. The original cabinet featured two screens, so the lack of play area here is probably the reason they've scaled the number of players back from six to four.

For nostalgic comics fans or people that hung out in arcades during the early 90's, this game will be a worthwhile addition to their Android phone. The multiplayer component could be useful on long trips with friends, where the X-Men: Arcade PSN or Xbox Live versions aren't available.

Frankly, it's a perfect port of a game that was lauded as great. The touch controls make it a bit more iffy than, say, if it had Wii-Mote connectivity; but sadly the chances of a studio like Konami working with indie developers seems quite slim. $2.99 is probably the upper price limit for a game that I could find elsewhere, but for a unique multiplayer experience and a solid beat-em-up, you don't have much to lose, here.

[Pictures] DROID Bionic Will Be Shipping With Android 2.3.4, Has A Gigantic 4.5" Screen