To help aspiring Android developers get off the ground and develop our next dream app, Android Police has partnered with O'Reilly Media, one of the largest technical book publishers, to give away a multitude of Android books to our readers. Each week or so for the next few months, we'll be giving away a different Android book offered by O'Reilly, asking for nothing but a minute of your time in return.

The second book in the list is Hello, Android (3rd edition) by Ed Burnette, released by Pragmatic Bookshelf in August 2010. Ed Burnette, who can be found at @eburnette on Twitter, is a software developer, analyst, one of ZDNet's Dev Connection bloggers, and a friend of Android Police.

Hello, Android will get you started creating your first working application: Android's version of "Hello, World." From there, you'll build up a more substantial example: an Android Sudoku game. By gradually adding features to the game, you'll learn the basics of Android programming. You'll also see how to build in audio and video support, add graphics using 2D and 3D OpenGL, network with web pages and web services, and store data with SQLite. You'll also learn how to publish your applications to the Android Market.

The #1 book for learning Android is now in its third edition. Every page and example was reviewed and updated for compatibility with the latest versions. Freshly added material covers installing applications to the SD card, supporting multi-touch, and creating live wallpaper. You'll also find plenty of real-world advice on how to support all the Android versions in use today-everything from Cupcake (Android 1.5) to FroYo (Android 2.2) and beyond.

If you'd rather be coding than reading about coding, this book is for you.

Here are the preface, full table of contents, and a few samples. 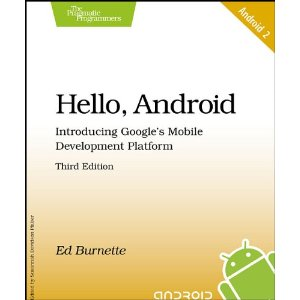 Here's the top review of this book on Amazon (by Steve K. Oliver II) that 92 out of 92 people found helpful so far:

I've read several books on Android from cover to cover, and skimmed several others, and "Hello, Android" is hands-down the best introduction to Android development.

You really can get through the book in a day or two. The explanations are clear, the topics focus on what's relevant to getting started in Android development, and when you're done you have the skills to dive into the SDK to continue learning.

There is a consistent example project that is developed throughout the book. I found this very helpful, because it showed me how all the different parts fit together. For example, launching activities from an existing activity, using multiple classes in your project, adding preferences, etc.

There are very few (if any) "gotchas" in this book. I followed the examples step by step without any problem. I think some people have used the book's online forum to ask about which packages to import, but when I used Eclipse it was done automatically for me. (By the way, all the files are also online.)

Even after having many months of Android development under my belt, I find that I still refer back to this book from time to time. That's saying something for a book that sets out to be an introduction.

Remember, this book is a great introduction. If you already know Android and are looking for a deep-dive, look elsewhere. But if you are curious about all the excitement around Android and have a few hours to spare, spend them with this book and find out what developing in Android is all about.

The contest is now over, and the winners have been posted here.

Some of you have been asking for a contest that does not involve social media, and this time we'll give you just that.

To enter the giveaway, just leave a comment here in this post (not on Facebook) and answer this question: "What attracts you to development for Android instead of all the other platforms out there (iOS, WP7, etc)?"

The winner will be selected by the Android Police and O'Reilly panel after June 11th 11:59 p.m. PT and notified via email. Make sure you use your real email in the comment, as that's what we'll use to contact the winner.

Oh, and I try to fight for this every time we do a giveaway, so I'm glad to report that this giveaway is open to anyone in the world!

And The Winner Of The LG G-Slate In The Giant Giveaway #2 Is...