Did you used to have a boombox? Don't you miss the freedom it gave you to enjoy your music at high volumes, headphone-free and cordless any place, any time? Sure, earbuds and noise-cancelling headphones are a lot more portable (and polite to everyone around you), but when you weren't concerned with drowning out all ambient sound or disturbing others, the boombox really was just... better. And it had so many great uses: In the kitchen. Outside. During household chores. By the pool. At the beach. The boombox made ambient music an option everywhere you went.

Unfortunately, boomboxes (good ones, at least) were big, heavy, ate through expensive disposable batteries, and were limited to physical media playback. In the age of streaming music discovery services and cloud storage lockers, it's all about gee-bees - not CDs - and the old-fashioned boombox is all but obsolete. By now, you've probably figured out from the title (and me waxing poetic over the bygone age of boomboxes) that I'm presenting you with a modern alternative to the old portable personal stereo.

Meet the SuperTooth Disco. Now, if you looked at the thumbnail, you likely guessed that the Disco is a speaker of some sort. And that the name ("SuperTooth") implies Bluetooth connectivity. And you'd be right. The Disco is basically a wireless, portable Bluetooth-ready speaker bar. The idea isn't revolutionary - there are other such products on the market by competitors like Logitech, Creative, and Sony. While I can't say that I've used those products, I can say pretty confidently that the Disco has made me rather uninterested in them - and that's a good thing.

The Disco does what your big, old boombox did - but in a sleek, powerful, and much more compact package. Actually, it does even more than your boombox - it's a speaker for your phone or tablet (or laptop), an alarm clock (not by itself), and a portable home theater sound system (that is to say, this thing gets loud). And, it easily fits into your backpack or small luggage. 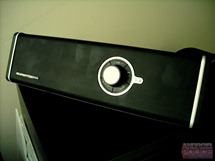 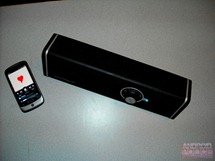 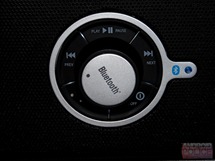 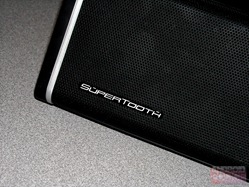 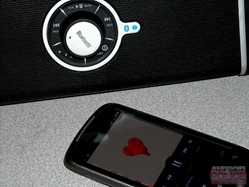 As you can see - this thing does get fingerprint smudges. A lot of them.

You're probably still thinking, "So what? Any old wireless Bluetooth speaker system can do all that." And you'd be correct. But the Disco is the first one to do it well, and at the right price (which, let's face it, is a huge factor in accessory purchases). Here's why.

Wait, Why Do I Want This?

Now that I have your attention (and if I don't, sorry), let's discuss what makes the Disco good at these things. But first, a quick spec rundown:

The Disco, in a nutshell:

The Disco adopts the traditional speaker bar design: two side-by-side speakers provide stereo sound. But the Disco takes it a step further and incorporates a (real) subwoofer as well, much more like what you'd find in a pricey home theater all-in-one speaker bar. None of the Disco's similarly priced competitors can lay claim to such a feature (most use "twoofer" systems - combining low and high frequency playback into the 2 stereo speakers along with a bass port for better lows). This means you're getting true 2.1 audio from a speaker that measures just over a foot in length and weighs about as much as the average textbook. Impressive. 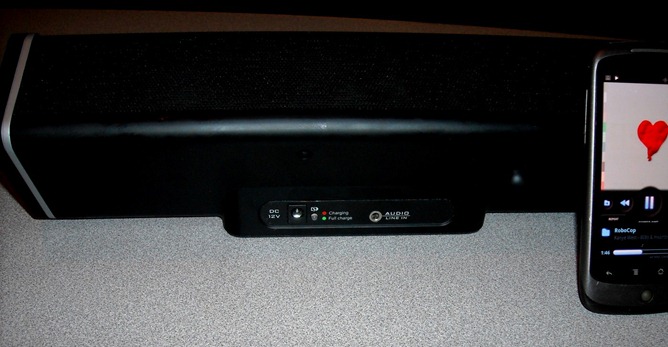 This Disco's size, shape, and weight make it easy to carry in one hand, and its slim profile means it can sit on pretty much any flat surface wider than a few inches. It also comes with a properly form-fitting but very cushy neoprene sleeve (with holes for the charging cable, 3.5mm jack, and bass port), making the Disco truly travel-friendly. The Disco really is meant to be portable - I put it on my kitchen counter while cooking, next to my car when I'm washing it, or even in my bathroom if I want some tunes in the shower (yeah, I went there; also, that's not a suggestion that it's waterproof). 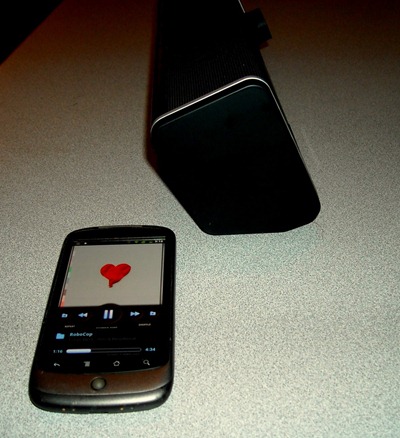 Unlike the typical boxy or iPod dock-like one-piece Bluetooth speakers on the market, the Disco was actually designed to be portable. It isn't just "movable" as a incidental result of its size. You'll want take the Disco with you - it won't end up as yet another dust-collecting desk fixture. Sounding a lot like (and better than) your old boombox already, right?

Of course, it's no boombox without the boom, and boom the Disco does. Despite its small size, the Disco can pump out up to 28 watts worth of ear-blasting noise (at that volume it really is more noise than sound, though). 12 of those watts emanate from the Disco's surprisingly powerful sub-woofer, while the smaller left and right speakers deliver a very respectable 8 watts each. These numbers may sound small and, compared to your 5.1 surround system, they are. But when judged against other portable speakers, this is well above the bar set by the Disco's competitors (compare even to the $300 Creative ZiiSound D5 - which puts out an only nominally higher 30 watts). 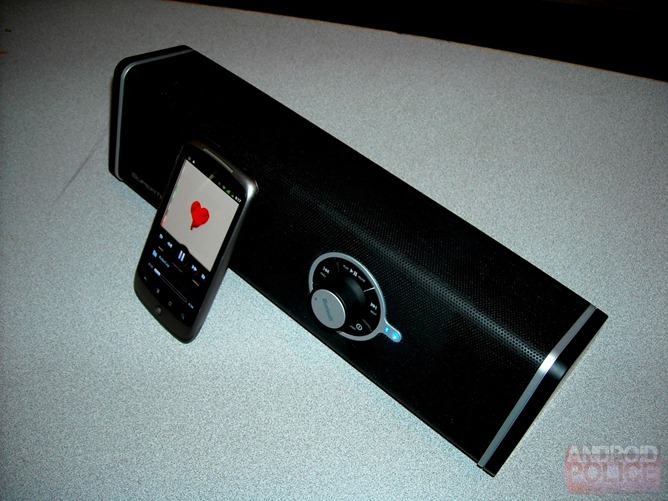 Watts aren't everything, though - sound quality is more about materials, insulation, and engineering than it is raw power. While the Disco is no audiophile system (and it doesn't claim to be), at low to medium-high volumes it puts out very accurate and crisp audio with deep, resonating bass (thanks to that little sub-woofer). Most portable speakers sound like garbage on anything that has a lot of "thump" going on - either excluding the low frequencies entirely or distorting them into oblivion. The Disco's sub-woofer allows it to maintain accurate bass reproduction up through medium volume without issue. At higher volumes, distortion (and vibration) will crop up - but given its size and price, this is something I expected.

At a distance, the bass distortion isn't going to be all that noticeable even at high volumes, mostly because the bass resonance falls off pretty quickly. The "bass boost" button will send the sub-woofer into overdrive, but really, I never found using this button to be necessary (or useful).

If you want quality ambient noise at normal listening volumes (that is, high enough to be audible in a medium or large room), the Disco is more than capable. If you're looking for a replacement for a 5.1 system, look elsewhere.

This is obviously the big selling point for the Disco - its Bluetooth A2DP audio streaming. Well, there's not that much to say besides "it works" (which is a good thing I suppose). The sound quality is good (keep your Android device below 90% volume to avoid distortion), and streaming audio doesn't pop, skip, or otherwise get interrupted. My biggest gripe is that the Disco uses the advertised Bluetooth transmit range (10 meters) as the maximum range of the device. You'll probably get about half of that, unless you're using some ultra-powerful Bluetooth radio (aka not what you're going to find in your phone.) Still, it's not like it's that big a deal - when it works, it works. 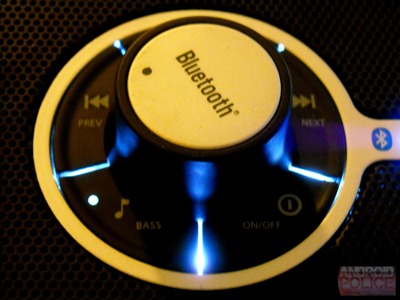 The Bluetooth controls (play/pause, back, forward) all functioned properly for me. There's also the aforementioned bass boost button (bottom left of the picture). In reality, it's useless - not because it doesn't work - but because it boosts the bass levels into the stratosphere, distorting tone beyond recognition. Basically, don't use it. I'd also be a little worried that continued use of the bass boost at high volumes could result in tearing the sub-woofer cone, but I'm not about to test that theory.

You probably noticed the 3.5mm-in jack on the back of the Disco. This should only be used as a last resort - direct 3.5mm male-to-male connections coming from a poorly insulated smartphone stereo jack into the apparently equally poorly insulated stereo jack of the Disco result in very loud and scary popping noises if you even look at the stereo cable wrong. I think the stereo jack was an (cheaply implemented) afterthought on the Disco. If you leave it alone and don't move either device, though, it works fine. Just don't, you know, touch anything.

But hey, they do include a male-to-male 3.5mm stereo cable in the box, so that's nice.

The Disco uses a rechargeable, non-removable NiMH (sort of like NiCad) battery cell. The advertised battery life is 3 hours at high volume - and an impressive 10 hours at medium volume. There are downsides to NiMH, namely, eventual cell degradation from trickle charging. You don't want to leave NiMH devices plugged in constantly - so your Disco should steer clear of the wall charger unless it actually needs to be charged (that is, don't treat it like a clock radio). And really, you shouldn't need to charge it all that often, the Disco can sit on standby for up to 1500 hours.

I plugged in the Disco and charged it fully on Wednesday. Today is Saturday, and I've still yet to see a low battery light blinking. I've been using at as a replacement for my stereo when listening to music, though I haven't exactly been pushing the volume very high. Still, with moderate use, I imagine the Disco could easily last 3-5 days for most people.

Compared to other portable systems, the Disco doesn't run away with the battery life crown - but it's certainly competitive.

The Disco is a great little speaker. Sure, it's no audiophile system, and it's not nearly as ridiculous as the Sonos S5, but it's not meant to be. It's meant to be the new boombox. It gives you music wherever you go (and as you read, a lot more), and at potentially loud volumes, free of cords and cables. It really one-ups the boombox, actually, since you can leave your cassettes and CDs where they belong - in a box in your attic so you can sell them on eBay in 20 years.

Finally, you should check out the hilarious flash video intro for the Disco, it's... interesting.

[Weekend Poll] Google Doesn't Allow Rooted Devices To Use Android Movies - What Are Your Thoughts?

And The Winner Of The LG G-Slate In The Giant Giveaway #2 Is...