Sonos is a company well-known in the tech industry for their line of wireless speaker systems, designed to let you sling music around your house without the  hassle of complex setup processes or routing wires through ceilings and walls. To mark the launch of their Sonos Controller for Android application, Sonos generously loaned me a full multi-room system consisting of two Sonos S5 speaker units and a wireless ZoneBridge router. Given the buzz surrounding Sonos's products, it seemed best to review the system as a whole, viewing the application and hardware as a complete set. Read on to see how it all stacked up. 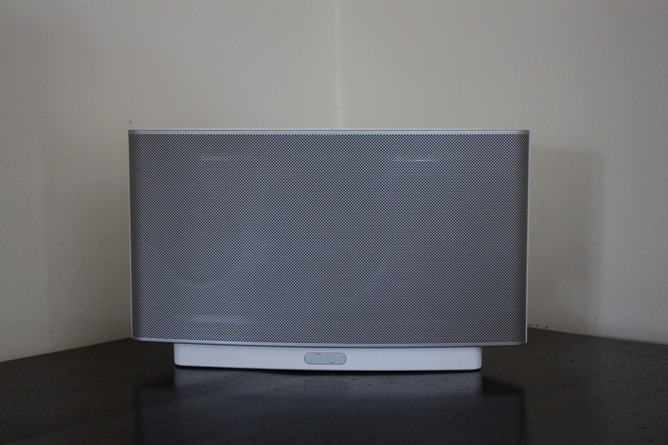 Contained within the box of the S5 is the composite speaker unit itself, along with an installer disc providing the Sonos PC software and a sizable multi-lingual user manual. Also included is the requisite power brick and a standard Cat5 Ethernet cable (more to come on that).

Now that the speaker has been freed from its cardboard containment, let's take a look around the Sonos S5. Inside, the box houses 5 dedicated amps connected to 5 separate speakers - 2 tweeters, 2 mid-range drivers, and 1 bass driver (subwoofer). The unit's shell is made of relatively weighty plastic resulting in a semi-portable kind of heft. Interestingly, the subwoofer bass port at the back is conveniently shaped in such a way as to act as a carrying handle, giving you a firm handhold when lifting the system.

The speaker unit is a fairly unassuming rectangular shape when viewed square on, with a convex metallic grille adorning the front and white plastic making up the other exposed surfaces. As for inputs and outputs, they are few and far between. Simplified controls are found on the top of the speaker with only a volume rocker, mute switch and indicator light to show for. As you would expect, this indicator light serves to provide information about the status of the device in terms of seeking and pairing.

On the back side can be found the power supply plug, two Ethernet ports, and a pair of standard 3.5 mm "mini" audio jacks. These allow for Aux-In and Headphone Out, using your speaker as simply an output for your local device or acting as a terminal to which you can stream your media but still listen silently.

Tip: In the case of the Aux-In port, by default the switch of input must be made in the remote software, as the speaker will not automatically detect an input on the port and play it out of the loudspeakers. This, however, can be changed via a setting tweak, which was not immediately obvious to us at first.

In terms of styling, the unit is certainly at home on a set of living room shelves, and the design is of an inoffensive, understated variety. The simple shape of the curved plastic shell and minimalist control layout make for an unobtrusive monolith that should fit quite nicely into most settings without drawing too much attention to itself.

The most glaringly obvious thing about the setup of this "wireless" speaker system is how much of an involvement wires have in the process. With the primary S5 speaker unit alone, you are not even granted the free rein you would expect from something labeled a "Wireless Internet Music Player". That's to say, the speaker unit can not exist independently but has to be physically connected to your wireless router with a cat5 cable. The only way to get true wireless freedom in your Sonos system is to purchase an additional "ZoneBridge" (MSRP 100 USD) to let your "wireless" speaker really live up to its potential. 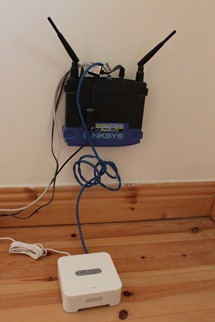 Setup was perhaps not quite as "wireless" as expected

According to Sonos, this ZoneBridge is necessary to provide the required performance for spreading music through your house in a reliable fashion, but when you consider that if you're using a laptop or any other device connected to the router wirelessly, the music would still have to traverse your own 802.11b/g/n network to get to the ZoneBridge, this claim makes very little sense at all. The diagram below should help to clarify this point.

Update: Sonos chimed in and defended the need for a dedicated transmitting device, such as the ZoneBridge, because their motto is "the music never stops," meaning the more components they control, the more reliable theoretically the music transmission should be. Take out a potentially unreliable router that might restart in the midst of streaming, and things should be smoother overall. This is the Apple approach, and my problem with it is that it is forced, rather than optional - if you want wireless music, it's the ZoneBridge way or the highway. 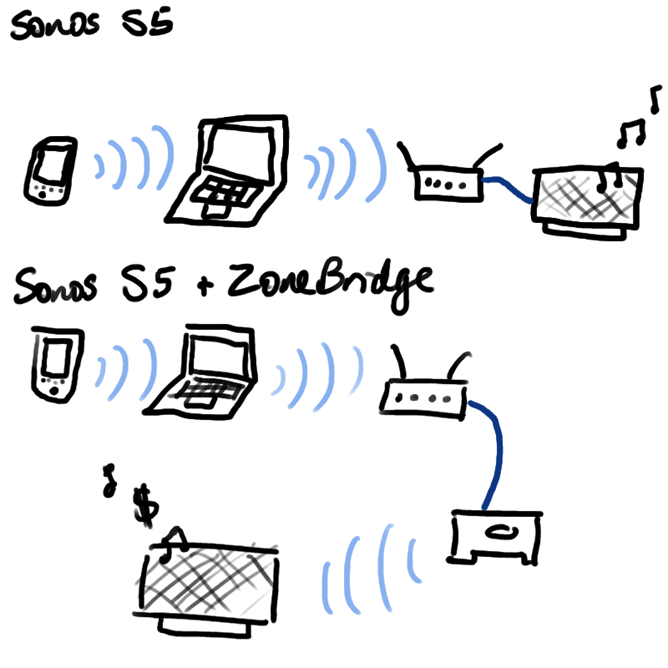 Once you have your system arranged the way you'd like, playing music isn't too much of an issue. Install the Sonos software on your computer, point it to your library, and send high bitrate sound to your [tethered] wireless speaker unit.

A really nice touch was the fully automatic wireless update process that flashed the latest Sonos firmware to all connected devices, making it very easy to get them all up-to-date upon new releases.

Unfortunately, you are somewhat limited in your choice of music sources. There are certainly plenty of internet streaming services at your disposal (depending on your region), but when it comes to providing your own music, you have the choice of streaming from your computer's hard-drive or a NAS. As the Android application name might suggest, that means no playback from your phone, at least not with the current version of Sonos Controller for Android. One would suspect that a feature like this must be high on the to-do list, and with the iOS application recently getting AirPlay support, it is definitely a lacking feature that Sonos is aware of and working hard to remedy.

The other, I would say even more disappointing aspect is that you are forced to use the Sonos desktop application to initiate music indexing and are limited to either that or the mobile app for playback. This means you can't use your favorite media player are are confined to the awful playlist manager within the Sonos family of software. Trying to manage a large local music library soon turns into a race against your own hand reaching for a hammer with the intention to most certainly cause costly destruction (that is, if you're lucky and indexing doesn't stop 10% of the way and silently refuse to go any further).

Furthermore, another possible use case of augmenting your existing computer audio system with the Sonos speakers doesn't seem to be possible - the sound is routed exclusively via Sonos's own speakers.

With remote playback conspicuously absent, the main purpose of the Sonos app is therefore music control. The application should play nice with most 2.1+ phones (no news of a Honeycomb version, though). Thankfully, it works very capably in its intended capacity, with the well polished UI granting users access to essentially all other functionality. This includes playing music from a variety of internet sources, along with giving you independent control of the various Sonos speakers throughout your house both in terms of volume and what music is playing. The list of potential services available to you (provided you have a subscription) include Pandora, Napster, rd.io, Last.fm, and several others (sadly, no DI.fm premium), along with the option to tune in to hundreds of Internet and local radio stations. 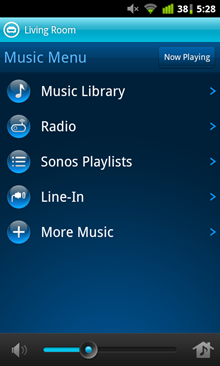 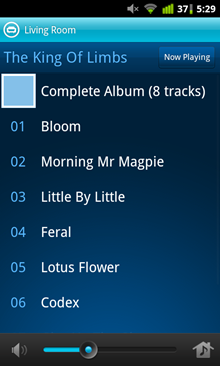 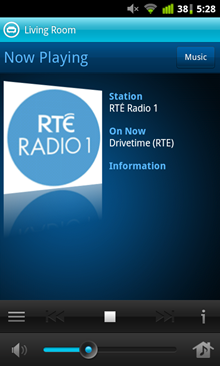 (1)  The main menu shows your various audio options such as (2) playback of your PC's music library,
while (3) Internet radio streams provided useful information such as the title of the current show on air.

In addition to these remote services, the Android application can, of course, control playback of music on your PC. However, as I mentioned earlier, to do this, your PC must be on and running the Sonos media player / streaming software. (Update: According to Sonos, because their setup uses Windows Samba sharing, there is no need to run the media player or any proprietary servers.) This inconvenience really underscores the sore lack of playback from the Android device itself, and is particularly frustrating if you are the type to store a lot of your music on your phone. On the other hand, there are plenty of functions in the application to make playback from your PC as facile as possible, with the ability to browse through your existing library, manage playlists, and search through your songs using the phone's keyboard or voice input.

Another thing that both the Android and the desktop applications do really well is multi-room zone management. For example, you could name individual speakers according to their placements around the house and group them into custom zones. These zones will act perfectly in sync, from sound output to volume and playback controls, which is very convenient for setups with more than 1 speaker. Each speaker can still be remotely controlled individually, so you can turn down the volume on one and increase treble levels on another. 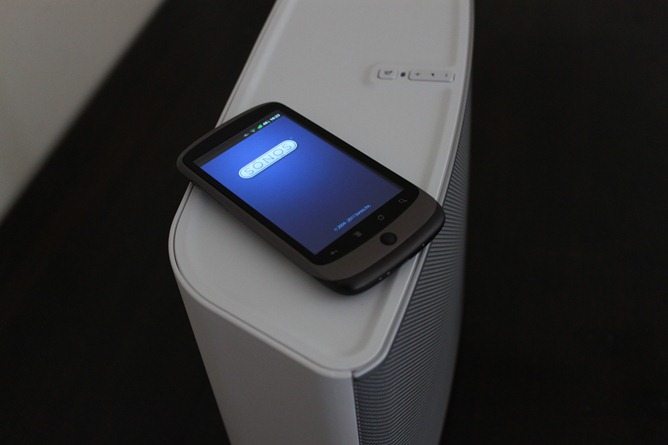 Once the aforementioned audio reaches the Sonos S5 speaker unit, it is produced by a 5-driver speaker array. This arrangement sadly did not live up to the proclaimed "crystal-clear" description, nor did it truly rival "much larger, more complicated audio equipment" in terms of sound quality. Having personally compared the Sonos S5 (MSRP $399, Street Price $350-399) to my M-Audio BX5a Deluxe monitors (MSRP $399, Street Price $225-299), the S5 sounded reminiscent of a cheap iPod dock. The bass was predictably over-pronounced, reverberating inside the thin plastic shell of the unit and drowning out a lot of the mid frequencies. 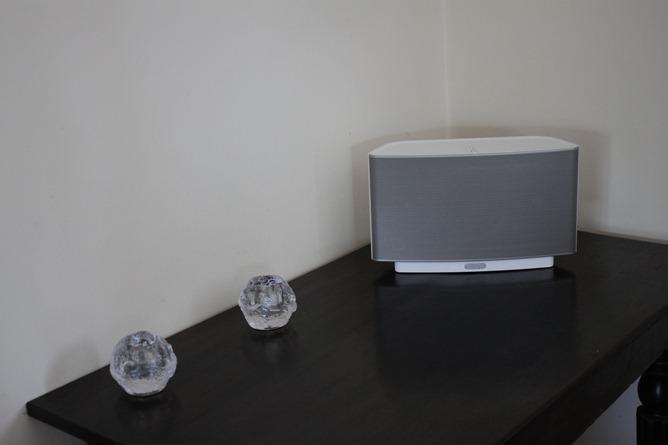 Placing speakers too close to walls will result in even boomier bass. Don't try this at home.

For someone who prefers a more balanced sound signature, this was rather discouraging. Thankfully an equalizer option is available in the Sonos PC software, and reducing the response of these suffocating lower frequencies provided a much more pleasant sound. Admittedly not one to rival the studio-quality BX5a's, but reasonable for a device in such a fairly compact package.

Tip: If you've got 2 Sonos speakers, you can configure them as a stereo pair - one would act as the left speaker and one as the right one.

If you're looking for a decent no-hassle wireless speaker set that supports multi-room synchronization and can be controlled via an Android app, the Sonos S5 is hard to beat. However, even though it contains 5 speakers inside, it won't come even close to replacing your 5.1 surround system. Hardcore audiophiles will find the sound quality relatively mediocre and will probably stick to their wired setups.

The price you pay is indubitably too high for what you get, but there are clearly people who will pay it, and Sonos, which isn't exactly under pressure from its non-existent competition, knows it.

If that sounds unpalatable to you, your best option is to keep an eye out for developments around the [email protected] scheme demoed by Google at this past I/O. Failing that there remains the DIY option, sure to be less chic in appearance but more satisfying to your ears and wallet. 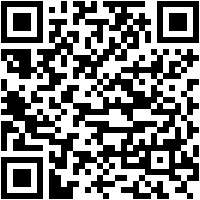