After a period of silence and uncertainty, Samsung released the floodgates of information about its Galaxy Tab 10.1 flagship tablet a few minutes ago. The ultraslim tablet will launch on June 8th at a single location - NYC's Union Square Best Buy of all places. If you don't happen to live in New York City, on the same day the Tab 10.1 will be available for pre-order in-store and online, ready to finally slip into your hands on June 17th nationwide.

Official launch partners include Best Buy online and in-store along with Fry’s Electronics, Amazon.com, Micro Center, Tiger Direct, and Newegg. As expected, these retailers will stock the 32 GB version for $599.99 and the 16GB version for $499.99.

Confirming our previous theory, the Tab 10.1 will indeed ship with Android 3.1, rather than Android 3.0.1 that is present on the limited edition devices passed out during Google I/O (it's not clear whether I/O devices will get an OTA to 3.1 around the same time or not). Android 3.1 brings improved stability and performance along with resizable widgets, scrollable app switcher, and USB host support.

Samsung's proprietary TouchWiz UX user interface will not be included at launch and is instead expected at some point in the future via an over-the-air update. Also in the future, you will receive the Samsung Media Hub, Readers Hub, Social Hub, and (drumroll) DLNA capabilities (Samsung calls this Allshare). The latter is especially great, considering the device's lack of an HDMI port, which can be otherwise gained via a special aftermarket cable.

If you're thinking of getting the Tab 10.1, right now would be a great time to take a look at our detailed Tab 10.1 review, complete with comparisons to the Motorola XOOM. The addition of DLNA and Android 3.1 right off the bat suddenly make the Tab 10.1 even more attractive than before (really, read the review before reaching for the pitchforks). 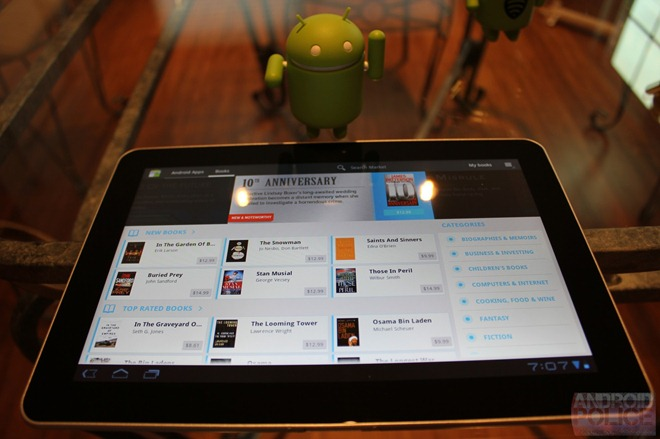 All this and the rest of the info that we already know is laid out nicely in the press release below:

DALLAS, June 2, 2011 – Samsung Telecommunications America (Samsung Mobile), the No. 1 mobile phone provider in the U.S.[1], and Samsung Electronics America, a market leader and award-winning innovator in consumer electronics, today announced the upcoming retail availability of the Galaxy Tab™ 10.1, starting June 8. The WiFi-enabled tablet measures at just 8.6 millimeters slim, making it the thinnest mobile tablet currently available in the world. The 32GB version of the Galaxy Tab 10.1 WiFi edition will be available for $599, while the 16GB version of the device will be available for $499.

A limited quantity of the Samsung Galaxy Tab 10.1 WiFi edition will be available for purchase exclusively at the Best Buy Union Square store in New York City on June 8. Best Buy customers may also pre-order the Galaxy Tab 10.1 online or in-store beginning that day.

The Galaxy Tab 10.1 is powered by Android™ 3.1, Honeycomb offering faster and smoother transitions between different applications, more intuitive navigation to and from home screens and broader support of USB accessories, external keyboards, joysticks and gamepads.

The Galaxy Tab 10.1 is the thinnest mobile tablet currently available in the world, measuring in at an ultra-slim 8.6 millimeters. The Galaxy Tab 10.1 also boasts an incredibly light weight of just 1.25 pounds (565 grams) for outstanding mobility and comfort in the user’s hands.

The Galaxy Tab 10.1 is designed with a brilliant 10.1-inch HD touchscreen display with WXGA 1280 x 800 resolution delivering vibrant colors and crisp clarity. This expansive screen is centered inside a narrow bezel to enhance the wide viewing angle.

“Ensuring that the Galaxy Tab 10.1 launched with Android 3.1 Honeycomb was part of our constant commitment to meeting the needs of our customers,” said Dale Sohn, President and CEO of Samsung Mobile. “The Galaxy Tab 10.1’s ultra-thin design and 10-inch touchscreen are impressive differentiators in the tablet market place. We’re going to make the Galaxy Tab 10.1 even more powerful, entertaining and secure through a series of upgrades coming to this device.”

The Galaxy Tab 10.1 will receive these new upgrades through a software update that customers can access over the air in the near future. Those upgrades are currently scheduled to include:

Samsung’s TouchWiz user experience is designed with a Live Panel menu for customizing the home screen of the Galaxy Tab 10.1 with digital pictures, favorite Web sites and social network feeds.

In addition, the TouchWiz UX includes a “Mini Apps” tray of commonly used features such as task manager, calendar and music player which can be launched while other major applications are already in use.

The Galaxy Tab 10.1 software upgrade will introduce the evolution of Samsung’s popular movie and TV content service, known as Media Hub. Media Hub has been redesigned with a new user interface for even easier downloads of rented or purchased content. The new version of Media Hub also includes an HD Extender which allows the user to playback Media Hub content on TV through an HDMI cable from the Galaxy Tab 10.1 dock or adaptor.

The Galaxy Tab 10.1 will also receive Samsung’s Allshare service, for seamless content transfer between the tablet and other DLNA-enabled devices such as HDTV’s, monitors and digital cameras. The software upgrade will also transform the Samsung Galaxy Tab 10.1 into a device capable of accepting streaming content from a TV to the tablet itself.

The Galaxy Tab 10.1 supports Wi-Fi 802.11 a/b/g/n connectivity to deliver rapid mobile download speeds and reduce data transfer times. The Galaxy Tab 10.1 also includes a Nvidia Tegra 1GHz dual core application processor for powerful gaming and multimedia performance. The Tab’s ultra-thin design does not sacrifice battery life, thanks to a 7000 mAh battery providing up to 9 hours of continuous use on a single charge[2].

In addition, the Galaxy Tab 10.1 integrates several enterprise solutions to provide support for exchange device management policies, improve the security of data and services maintained on the tablet and meet IT guidelines for remote device access. The enterprise solutions include:

The Galaxy Tab 10.1 is preloaded with the full suite of Google Mobile Services including access to more than 60,000 Android Market™ applications for Galaxy Tab 10.1[4], Gmail™, Google Search™, Google Maps™ 5.0 with 3D maps, and Google Talk™ with video and voice chat.

4 Based on a statistical analysis of existing Android Market™ applications