In another step toward becoming one of the most dev-friendly Android manufacturers, HTC today launched HTCdev.com, a website "dedicated to providing you with the tools, advice, and community you need to pursue the possibilities." 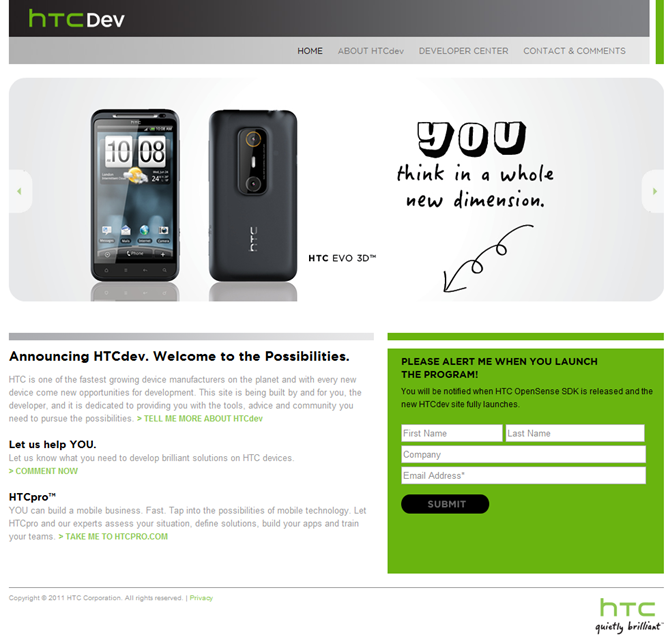 The vast majority of the site's content has to do with the OpenSense SDK, which should be launching... sometime in the future (though you can sign up for emails about it now). HTC doesn't go into details about what it does, stating only that it will allow developers to write applications better integrated into Sense UI. Specifically, HTC notes that devs will be able to access a "Tablet pen API" for the Flyer/View 4G as well as a "Stereoscopic 3D display API" for the EVO 3D. The company also tweeted out that OpenSense will provide sample code and plug-ins as well as APIs specific to Sense.

What's more, HTC also launched the HTCpro service, which encompasses everything from mobility consulting and management services to training and app development. For example, if you're the CEO of a business and you want a mobile app, HTCpro employees can help you build a program through what appears to be a series of one-on-one sessions. If you work in the education field, HTCpro offers comparable training, and if you're a private developer, it's a similar story. There's an interesting twist, however: HTCpro.com claims that HTC will work with you regardless of what platform you're developing for - even if it's iOS, BlackBerry OS, or Symbian.

HTCdev.com also promises that HTC will deliver "tools, tutorials, blogs, and events" for developers in the future. Intriguing to say the least - and a huge leap forward for a company that just a few weeks ago was doing everything in its power to keep devs off its devices.