It's often the case that a game does not necessarily have to be complicated in order to achieve success, and this point is proven in Chalk Ball. The premise is simple: keep a bouncing ball aloft by drawing lines on a chalk board, all while earning points towards a high score. Drawing shapes depletes your chalk meter, which is required to be able to scribble further.

In order to replenish this meter (and your drawing abilities), you're required to hit white balls on the board which spawn at random. Hitting a ball with an already-full meter adds a white line along the bottom of the screen, giving you a free bounce if your efforts fail. Other power-ups populate the boards as well, like icons for an instantly-full meter, extra balls to worry about, or even an effect that cuts your meter in half.

Because speed and angle play a big factor in Chalk Ball, the fact you're not totally in control of your bouncing adds a little bit of unpredictability to the game. Sometimes it'll take a couple bounces to really get the ball moving where you want it to; I'm not sure if this is a lack of developer intuition or a layer of challenge added in. Having relatively small targets to hit makes it important to consider each bounce, as well as the repercussions that follow it. 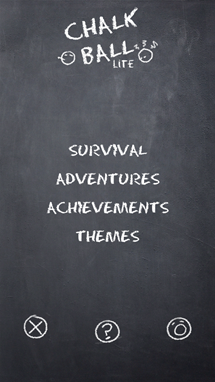 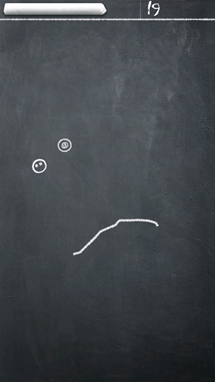 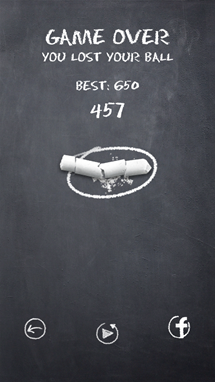 The game's Survival mode puts you in a "keep it up as long as you can" situation, whereas the secondary "Adventure" mode has you aiming for stars placed throughout the level. Learning to play off the ball's speed and trajectory can be a bit challenging to learn, but it offers a decent amount of re-playability, even during the trial version. OpenFeint achievements can give you different feats to shoot for, like bouncing a ball when it's just about to fall off the playing area.

If I can go cross-platform here for a second, Chalk Ball plays a lot like Kirby's Canvas Curse for the Nintendo DS. In both games, you're given a limited amount of artistic freedom, and it's very easy to get creative with it. You might be tempted to draw buckets or large ramps to aim your ball, and you can, with great risk.

Chalk Ball seems to be content to ramp up the difficulty, though, as your chalk meter doesn't refill automatically. This means that if your ball isn't headed for a refill and you're out of chalk, your session's over. This can be a bit unforgiving, especially when you've made several (failed) attempts to get the ball headed towards a cluster of power-ups. 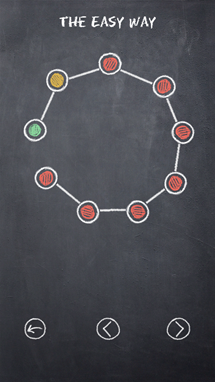 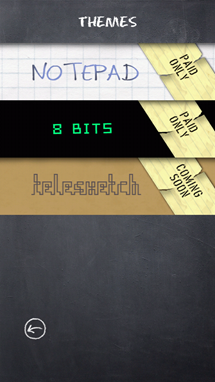 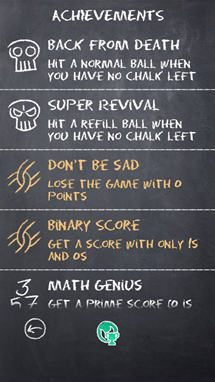 It's can be heartbreaking to see your chalk meter run out mid-swipe as your ball plummets to its death, especially when the chalk meter depletes far faster than you would think it would. Play style evolves into a series of carefully-planned swipes that end up being as small as possible, in order to save chalk. This brings up a unique conundrum: why are the developers giving us the freedom to play with an open canvas when players don't have the material to play around with?

Regardless, the Lite version of the game only features one skin (the chalkboard) and a few adventure levels. The skins available in the paid version change the experience of the game to suit your mood, from a more paper-and-pen-friendly notepad to an 8-bit display.

On a bit of a low note, every attempt to open Adventure levels (besides the first tutorial) has resulted in the app crashing to my home screen. It's a pity, as I would've liked to have gotten a bit more understanding of how a story mode in this type of game would have worked.

[UPDATE 6/1/2011]: The dev has gotten in touch with Android Police and informed us that this bug has been fixed in the latest version of the game.

From the video below, however, the Adventure levels look to rely heavily of gimmickery to add variance and charm. This kind of reminds me of Little Big Planet, especially when coupled with the quasi-intellectual labeling ("Geometry Abduction", etc). I sadly haven't been able to progress past "The Easy Way" (pictured above).

I'm not sure if these problems are limited to the Lite version, or if it's just my phone. I've tried clearing my data and reinstalling, but the problems persist. I'm running Chalk Ball on an Atrix, so if any of you readers have similar problems, be sure to let me know in the comments.

Chalk Ball is a €1.49 download on the Android Market, which works itself out to approximately two dollars in Canadian/American currency. With only fifteen minutes to try to see if the adventure mode is fixed in the Full Version, I'm not sure I'm going to take the risk in purchasing it. 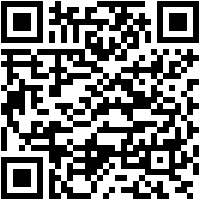