I'm a big fan of puzzle games on my Android. They tend to work well in a touch-controlled medium because their concepts are usually simple enough to pick up and play. Refraction is no different, and challenges players with over 120 levels of color-matching, light-bending goodness that will have even the smartest of you scratching your head for awhile.

Like every good puzzle game, Refraction starts out with a simple concept: use mirrors to guide beams of light to their corresponding beacons. It then adds another element in prisms, which allows for the splitting and combination of colors. Combining a yellow and red beam in a prism will produce orange, and running that beam back through a prism will break it back into its original components.

Of course, you have a limited number of mirrors and prisms per level. Thankfully, the developers were a bit merciful and let you reposition them as many times as you need to. This keeps you from staring at the level, hypothetically working out what could happen; instead, you can just mess around with components until you find something that works. There are multiple ways to complete each level, so players are able to come up with their solution, as opposed to the solution. Sometimes you can pass a level by complete accident, but I'm willing to take a win wherever I can get it.

Challenge gets kicked up a notch with the introduction of other elements, such as doors that need to be unlocked by (again) color-coordinated lasers. Space quickly becomes at a premium as multiple beams converse on different spots. Fans of leaderboards or time attack modes will be disappointed, as there isn't any integration for achievements or accolades: the point of beating levels in Refraction is merely just to beat them, not show that you did to your friends online. 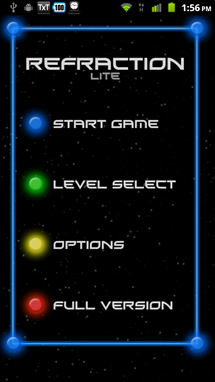 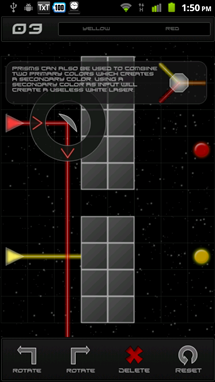 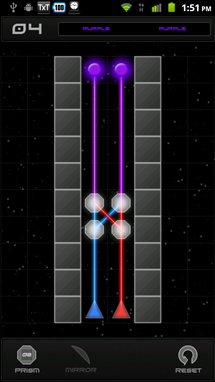 For some weird reason Refraction really reminds me of playing Interplay's "The Lost Vikings" as a kid. It's got this quasi-sci-fi aesthetic that isn't trying to take itself seriously - you just match colors in the void of space.

The controls can be a bit of a challenge to pick up (especially when trying to cycle through different lasers), but can thankfully be customized with the addition of on-screen controls. It's not like the game needs precise controls for time-sensitive actions, but that shouldn't excuse it from not being functional.

Refraction is a $2.99 download from the Android Market, and includes over 120 levels. The lite version caps at only 20 levels, which are specific to the lite version only. This was either done for variance, or in an effort to give people trying the game a bit of a learning experience as to what the "real" game could hold. If the ramping difficulty is any indication, players who full-clear Refraction have earned some bragging rights, even if there aren't any achievements to show it off. 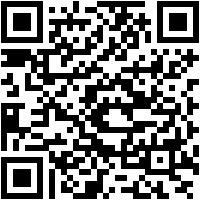 [Updated Again] N64oid, Snesoid And Other Emulators Pulled From The Market, Developer ...