Update: June 4, 2011 - I've taken an awful lot of flak for this review (and that's fine). I stand by the review because I can't honestly recommend this phone in good conscience. With that in mind, I realize that not everyone may share my opinions, and that's why I suggest potential purchasers go and take a look at it to see if they will notice the screen issues as much as I do.

Further, a lot of you seem to think I was using or inspecting the phone in a critical way; this was not the case. I noticed the screen and performance issues immediately and continuously under normal use conditions. I have played with many devices at shows, events, and stores, and the X2 came up lacking.

The original DROID X was, by most accounts, a great device. And now, nearly a year later, we have the DROID X2, which takes the same shell as the original but with a seemingly substantial spec-bump to fill it. The most notable improvements: a dual-core Tegra 2 processor and a qHD screen.

Unfortunately, what looks good on paper doesn't always work out well in practice, and this is one of those times. The Tegra 2, powerful as it is, isn't enough to make the X2 as smooth and responsive as its single-core competition (like the Incredible 2), and the qHD screen makes a few sacrifices to hit a higher resolution.

You can't fault the X2 for lacking horsepower:

With the basics established, let's take a look at where the X2 shines and where it falls short.

In A Sentence: A lot of horsepower under the hood doesn't make up for a lack of RAM, a seemingly poorly-coded UI, and a device-ruiningly-bad screen.

You should buy it if: ... Well, to be honest, you probably shouldn't. The screen is terrible, and it has a few performance issues that will be difficult to remedy with custom ROMs (if the X2 ever gets them.)

Hopefully you're still with me here - this is probably a review you're going to want to give a full read. 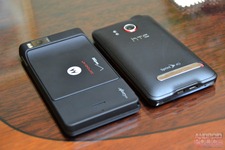 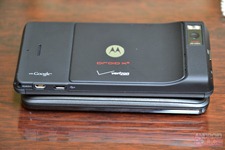 Build quality is identical to that of the DROID X. In other words, it's very solid. All the bits fit together snugly, and the plastic is rubberized, lending a soft feel to the device. Complementing those traits is the fact that weight seems to be just about perfect; while the DROID Incredible 2 was so light that it felt like a toy, and the EVO is so heavy it feels like a brick in comparison, the DX2 seems to hit the sweet spot. 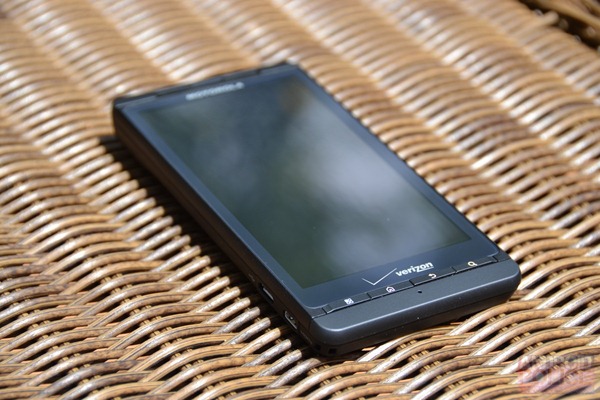 I did notice one minor problem: one of the four function buttons below the screen sits almost imperceptibly lower than the others and isn't quite as stiff and springy. It's not very noticeable and I'm guessing it's an isolated incident rather than a design flaw.

PenTile Display: When An "Improvement" Isn't

One of the pitfalls of low-resolution displays is that you can actually discern the pixels. Because the pixels are large, the image on the screen will never be sharp. The obvious way to combat this problem is to up the pixel count. In the past few years, displays with a resolution of 480x800px (or 854 in the case of the taller DROID X) have become fairly common among smartphones and typically provide a great, sharp image with little downfall. More recently, though, companies have moved towards qHD, which checks in at an impressive 540x960 pixels. And so what we have with the DX2 is a spec bump in the display department; while the original DROID X rocked out to the de-facto 480x854, the X2 has seen the aforementioned upgrade to 540x960. While that sounds good on paper, it doesn't play out well in practice, thanks to the use of a PenTile display. 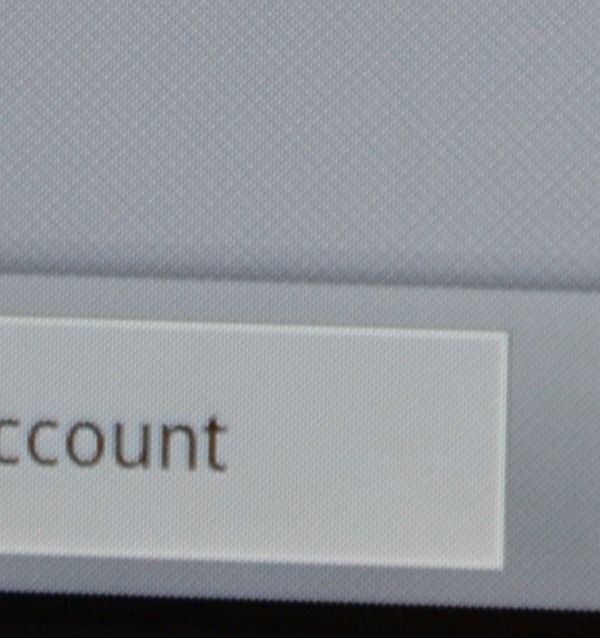 Note the diagonal gridlines; these are visible even with the naked eye, and almost look like an intentional gradient (but it's not).

The DROID X2 is supposed to be a high-end device, and with that comes the expectation of an excellent screen. Unfortunately, even run-of-the-mill lower-end devices have better screens than the X2. It's almost painfully bad - enough so that I would never, ever buy this phone, and I would actively advise anyone who asked to steer clear of it. It's bad in every single way conceivable: 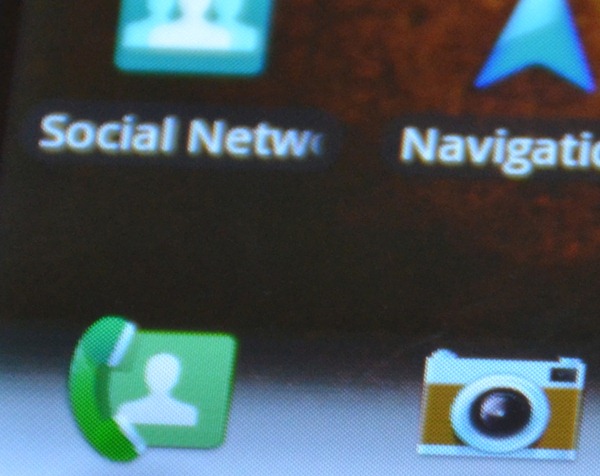 Edges are jagged, thanks to the diagonal layout of the PenTile display.

From full arms-length, the screen looks fine and you can't notice the banding. But from what I'd consider "normal" viewing distance, it's terrible, which prompts closer inspection, and it's all downhill from there.

During final editing of this review, Droid-Life took a closer look at the screen of the X2. For an even deeper look at the downfalls of PenTile displays - including many of the complaints I mentioned above - check out AnandTech's rundown. Ninja edit: As commenter Chris clarifies below, PenTile displays aren't all bad - just seemingly Motorola's poor execution. 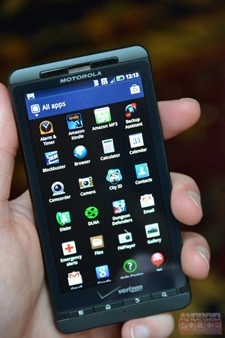 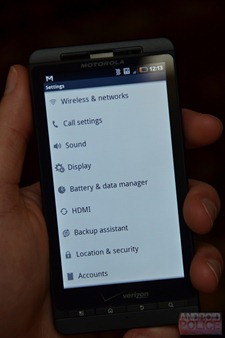 This is the first dual-core device I have had the chance to thoroughly review, but not the first time I've used one. Unfortunately, the DROID X2 falls short of the other dual-core devices I've tested; worse still, it falls short of even single-core devices. It's outclassed by the DROID Incredible 2, and even my year-old EVO chokes less (granted, my EVO is running CM7 rather than a stock Sense-based ROM, but the point stands).

Three examples where it's noticeable:

I'll freely admit these issues may not be uncommon on somewhat older Android devices, but they shouldn't happen on a Tegra 2 device, and I'm going to guess that NinjaBlur and/or a lack of RAM is/are to blame. If you're using a static wallpaper, you probably won't notice any lag on a day-to-day basis. While lay users may not notice, power users may not be able to say the same. 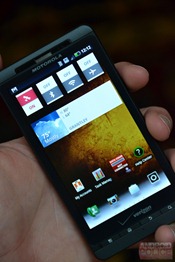 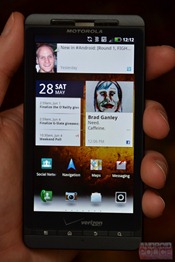 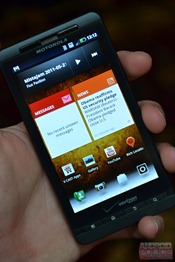 Close followers of AP know that I hold no bias against manufacturer UIs. I like HTC's Sense, and I don't mind Samsung's TouchWiz. NinjaBlur, however, isn't so great. The performance issues mentioned above are enough of a turn-off as it is, but what makes it slightly worse is that some aspects feel half-baked.

Prime example: there's a Social Status widget that only displays your most recent Tweet/Facebook status. You can post a new status/tweet, but it doesn't show any feeds (including your own) and there's absolutely no way to reach any feeds from within the widget/app. This means that to see feeds, you need to do one of two things: either add the Social Networking widget, or open the Social Networking app. But there's a key difference in the two; the widget opens up a gallery-style viewer, while the app opens up the standard list-style view. You can get to the list from the gallery, but not vice-versa. And you can't get to either from the Status widget.

Social networking stupidity aside, NinjaBlur isn't all bad. The other widgets generally add some visual flare while functioning as expected, although they don't necessarily add value. In essence, NinjaBlur mainly sticks to re-skinning the stock Android widgets to be more attractive, but contributes little beyond that. I'd be fine with this - even happy - if it weren't for the previously mentioned performance issues.

Connectivity is a mixed bag. Cellular reception seems to be good, even slightly better than average. Same with WiFi - it's able to pick up signals where the EVO and DInc2 could not. But even when the signal is strong (when the phone is within 3 feet of the router), it loses connection with alarming regularity. Further, it seems to not want to update social feeds unless I'm on WiFi. For example, I went 8 hours yesterday while using only 3G and heard nary a social peep from the X2. The instant I turned on WiFi I had a few mentions/DMs as old as 7 hours.

I'm not really sure what's to blame, but my guess would be the something in the "Battery & data manager," although everything is set properly (data saver off, normal battery mode, etc.)

This is perhaps the one place that the X2 really stands out. Battery life is good, especially considering that this is a dual-core device with a 4.3" screen. However, it's a bit tough to really say exactly what you can expect. As I mentioned when talking about the screen, it's downright dim when using automatic brightness. Thus, you can certainly expect good battery life if brightness isn't a concern. However, I think most people would want to turn the brightness up manually (and rightfully so), which makes the question of battery life a bit more tricky to answer. At full brightness, the screen feels like a small sun, in which case you'd probably manage to make it through an 8 or 9 hour workday if you're not using it very heavily. With brightness somewhere in the middle, I'd still estimate that you could go through a full day of moderate use on a single charge.

In a sentence: battery life is better than most other powerful high-end Android devices, but you're still talking about a high-end phone.

The camera is thoroughly average, as well. It's adequate for a phone camera and will do in a pinch, but you won't be using it to take professional photos any time soon. I think part of the blame can be attributed to the "continual auto-focus" feature - after a few seconds, it stops showing the auto focus box and you're left guessing. Clarity was also lacking. 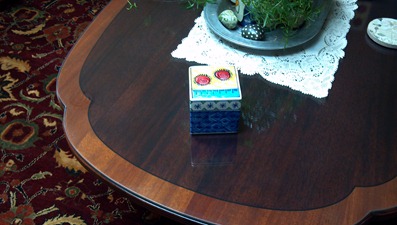 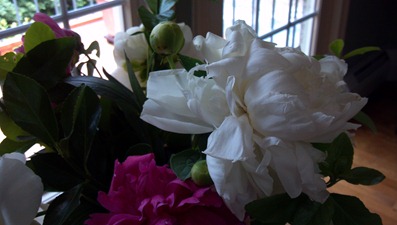 As is common in phone cameras, the lighting just isn't great. In bright indoor settings, for instance, it overcompensated the darkness. 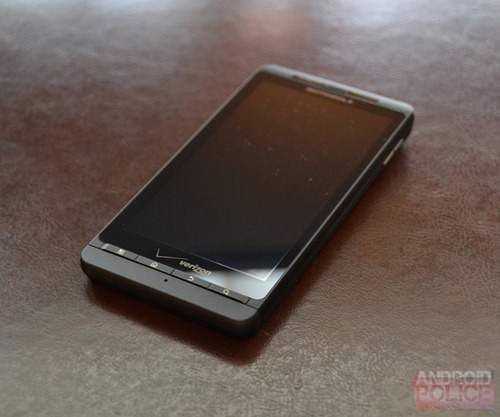 It's an odd thing, really: I don't hate the X2. In fact, I almost like it. But even so, the screen alone is enough for me to tell people not to purchase it, let alone all the other more minor issues. It's unfortunate - I had high hopes for the X2 across the board and it failed to deliver on nearly all of them.

One thing that makes me question myself is that I seem to be largely outspoken on my issues with the display. Few people have complained about it on the ATRIX, which has the same PenTile qHD display, and similarly few have griped about it in early (p)reviews of the X2.

So, my ultimate suggestion? If you're considering purchasing an X2, go play with one. Check out the menus, browse the web, look at pictures, and watch a video clip. If the issues with the screen don't bother you there and you won't miss the LTE connectivity, then the X2 may be the device for you.

[Weekend Poll] What Manufacturer Will Your Next Device Be From?