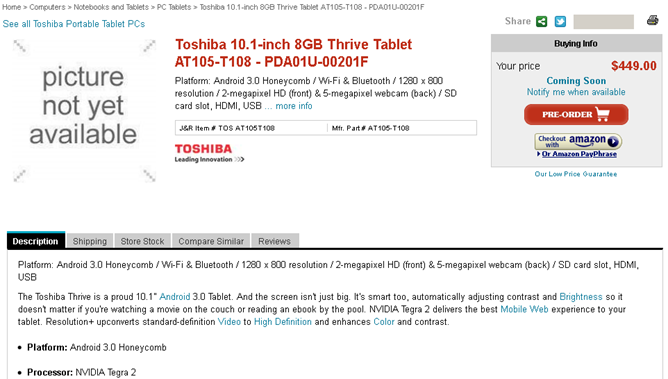 Before the listing was suddenly ripped from J&R's website, the 8GB model was rocking a $449 price tag, while the 32GB version was sitting at $579 - a pretty competitive price point for a 32GB tablet. The 8GB version, however seems to be a moderately steep price for the size, considering that you can get 16GB out of the the ASUS Eee Pad Transformer for $400, or the Acer Iconia A500 for $450.

If you need to know the rest of the specs of this rather illusive tab, just look at the common specs of Android tablets on the market today - 1GHz Tegra 2 dual-core processor, 1GB RAM, 10.1 inch display, and Honeycomb. Aside from the cookie-cutter features, this tablet also rocks full SD, full HDMI, and full USB support, setting itself apart from the rest of the pack.

If you're considering picking up a the Thrive when it finally drops, our hands on from CES this year may just seal-the-deal for you. Have a look here:

Just in case you're the obsessive compulsive type that wants to repeatedly check to see if the pre-orders are back online, here are the links where they once existed:

[New In The Market] Robotek Brings Lasers, Explosions, and Risk-Based Mayhem To The Palm Of ...

Miro 4 Allows for Torrenting, Video and Music Syncing, Podcasting and Everything Else Under the Sun