A few months ago we reviewed an interesting app called Texty. This app connects an Android phone to a computer through Chrome, and allows the user to send text messages straight from said browser. This is useful when you are working on your computer and you do not wish to move your hands away from your comfortable ergonomic keyboard and start pecking away at a small 3-4" screen. CrossTxT performs a similar function, but in my opinion, is far superior to Texty.

Firstly, CrossTxT is currently in beta and you will have to sign-up for a free invite.

The CrossTxT devs have been kind enough to provide us with 50 beta invites for readers of Android Police. To ensure you get an invite, head over to the CrossTxT beta sign-up page and in the "Comments" section mention "Android Police". Happy texting!

After you have signed up you will be prompted to download the CrossTxT app for your Android phone. The app itself does not do much, as it merely bridges your phone with your computer (specifically a browser). Once you have installed the app you can sign in (with your registered account), import your contacts and sync your messages (decide the amount you want to sync) with the online CrossTxT server. 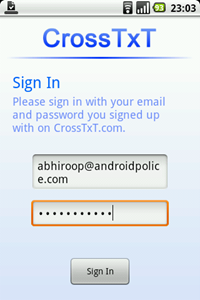 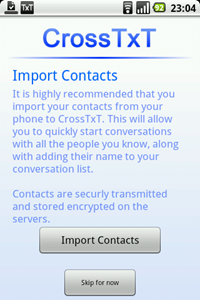 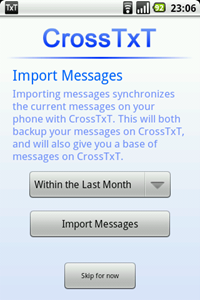 You can play around with some of the settings, but that's all you need to do on your phone to ensure CrossTxT is up and running. 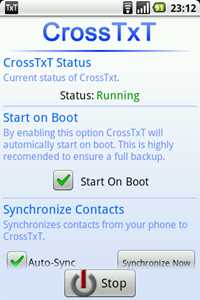 Once you have installed and set-up CrossTxT on your Android, head over to the CrossTxT website. Login, and you should see all your messages listed on the left panel. Select one of the "conversations" to see the messages in the main panel. 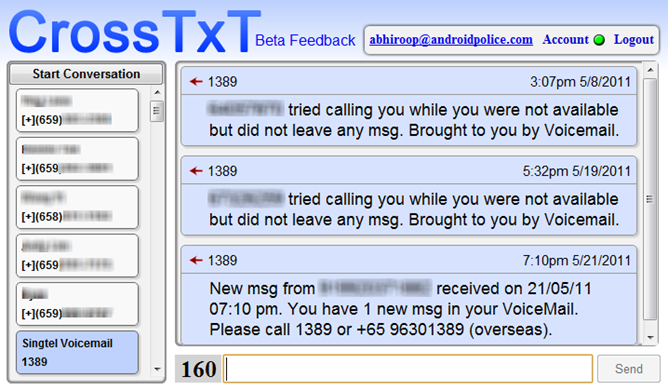 You can send a text to any contact or phone number by selecting "Start Conversation". The contact sync worked without a hitch, and it even had auto-complete. While CrossTxT is entirely website-based, you can install the Chrome extension to provide you with pop-up notifications every time you get a message.

Conclusion and Comparison with Texty

Both CrossTxT and Texty are great apps for a number of reasons. For example, you do not need to connect your phone to a WiFi network or initiate any kind of connection with a particular computer. The respective app needs to be running on the Android device and you need to be on a computer with a browser (though, again, Texty is a Chrome extension while CrossTxT is browser-agnostic). Further, the apps sync your messages and contacts so you have a full history of all the messages available to you on your computer. Finally, both apps take little or no interaction after the initial set-up.

In the end I chose to use CrossTxT over Texty simply because Texty was, at times, a little unreliable. Some messages I sent to friends showed as "sent" but in reality my friends never received them. Texty also seems to have issues syncing contacts - it simply never pulled some of them for me. I'm sure these issues are just  bugs that will be ironed out eventually, but considering both apps provide very similar functionality with minor cosmetic differences, the little things - such as reliability - really make a difference.

There were some other improvements I found in CrossTxT. Because Texty only works through a Chrome extension, it may not be usable on computers blocked by IT administrators; in such a case, CrossTxT would continue to function. On a more subjective note, I also found using the CrossTxT interface much simpler than the Texty one.

Nevertheless, Texty has one major head start over CrossTxT: it allows split texts. In other words, if you type texts longer than 140 characters, Texty automatically breaks it up, while CrossTxT requires you to send your first text and then send another one (but see below on update).

I had some feedback on CrossTxT and the support team got back to me quite quickly on all my questions:

Q: It would be useful to send multi-text messages. That is, if I write a message longer than 140 characters it should automatically split it into two (or more) messages.
A: We're toying with the idea of making multi-messages (along with other features like MMS support) a part of a 'gold' edition of CrossTxT to cover server costs. We don't want to sacrifice basic functionality on a free edition though, so we're definitely looking for beta tester feedback on this
particular issue.

Q: A dedicated desktop app would be nice (but not really necessary).
A: I get this request almost every day :) It's just a matter of finding the time.

Q: A search feature for messages.
A: This is definitely in the works.