Before I get this post underway, I'd like to send my condolences to the family of "Macho Man" Randy Savage, who had passed away 2 days ago. Wrestling is a guilty pleasure of mine, and his rambling promos about the Danger Zone will always have a special place in my heart. RIP Randy. 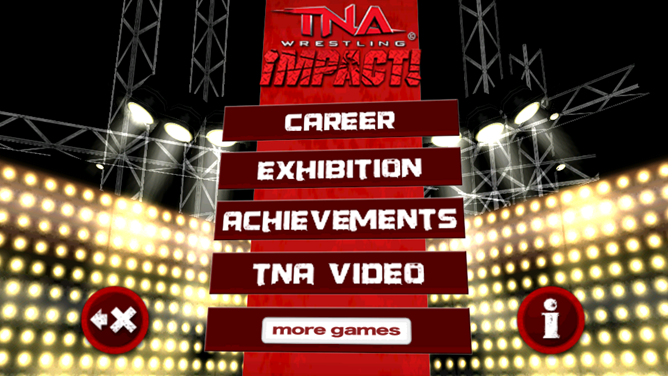 A lot of my youth was spent playing the Smackdown series of games on the PS2; I still pop in Here Comes the Pain every now and again to relive the glory of throwing someone off the top of a ladder through a table. These games, with their arcade-y mechanics and campy story modes, were kings of replayability: if you got bored with your current roster of brawlers, you could just create a bunch more and suddenly the game was new again.

Those elements are all present in TNA Wrestling iMPACT! that was recently released in the Market. You can create your own wrestler in a number of styles and move-sets, modifying the way he looks to the moves he performs in the ring. You can then take this created wrestler through the game's story mode or mess around in an exhibition.

The roster features a number of TNA wrestlers, which I applaud. Instead of just including the "big names" in the company, they've filled up each of the game's wrestling styles (brawler, big man, high flyer) with a roster of twenty-four. They've also imported their actual theme music instead of producing low-quality sound-alikes.

The story modes are pretty straightforward: you pick from the heavyweight, X-Division (high-flyer) or tag team division, then go through a tournament to determine who the new champion will be. The writing is laughably bad, but that's par for the course with TNA Wrestling in general. It offers a little bit more purpose than just going through exhibition modes and it's not too bad. 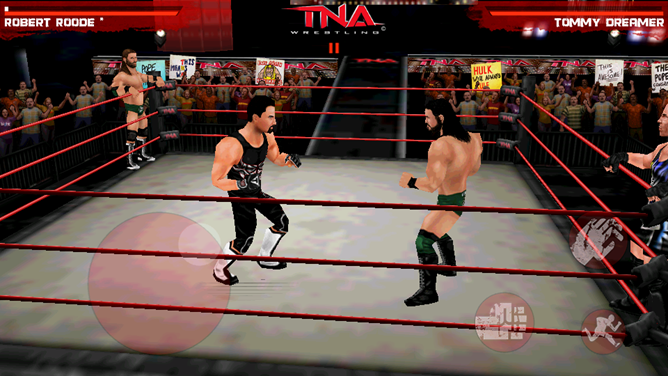 Let's Get This Part Out of the Way

The game plays surprisingly well, considering it relies on an on-screen joystick for movement. Virtual buttons for grapple and strike attacks, along with a run button, are responsive and work as they should. There's also a "special" button that only appears in certain contexts, like tagging a partner in/out, climbing in or out of the ring or pinning your opponent. Quick-time-events also pop up for evading/countering attacks.

You have a health bar (in red) and a charisma meter (in white) which allows you to get a feel for how you're doing in the ring. Having low health means you'll be easy to pin or submit, and having a full charisma meter means you can execute a high-damage finishing move. Each wrestler's finisher has its own situation, so it takes some reading in bio screens to figure out exactly what that is.

Regardless of whether it's a "wrestling" title or not, the game actually plays quite nicely. The moves are fluid, and they don't have awkwardly-long pauses between the animations that drag the pace of the match down. While there are only so many variations of moves you can do (for instance, you only have one alternate grapple), things stay varied enough that they aren't boring. 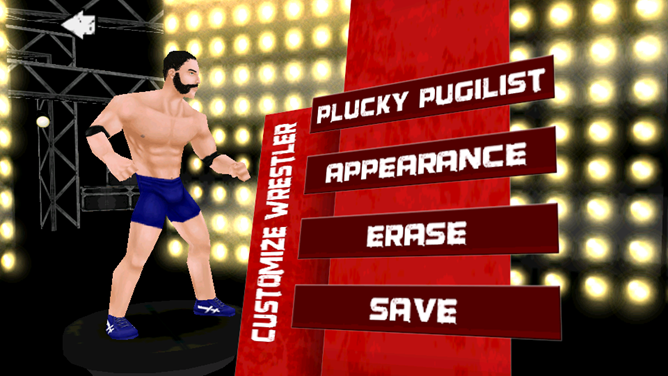 All in all, the gameplay and features of this game are amazing for its "limited time" $2.99; if you're a fan of wrestling in any way or just want a campy game to hold your interest for awhile, TNA Wrestling iMPACT's got you covered. Hell, I created a 30s British boxer (pictured above) and had him engage in only the classiest of fisticuffs.

However, gameplay isn't the only aspect of a successful title.

iMPACT is definitely a title that could benefit from the new size limits on applications that were announced at Google I/O. Right now, it hits right against the current 50MB limit, and it shows: the app's main title theme is a laughable 15 seconds, cuts out in the middle of the song and loops endlessly. It makes me not want to spend too much time in the menu screens at all.

This also happens during the wrestlers' entrances: 5-10 seconds of their theme and then it just cuts out. While the entrances are short, the sound is even shorter; an effort could have been made to make it mesh a little bit instead of just cutting to crowd noise. If iMPACT used a Glu Mobile- workaround (downloading a bigger package once the initial app has installed), these problems could have been alleviated.

All in all, once the app's $2.99 price doubles to the $5 area, things become a little hazy; you're going to want to make sure that your phone is powerful enough to handle it (I tested it on a Tegra 2 device) and that you're going to get enough enjoyment out of it. Perhaps the title will be worth more once the developers have more space to work with, but for now, it's a bit up in the air.

[Review] CrossTxT Bridges The Gap Between Phone And Computer For Easy Texting - Regardless Of ...