Our first giant giveaway was a huge success, with lots of excited entries received from many countries around the world in the 2 weeks it was running. In the end, one lucky winner - Keef from the UK - walked away with a free XOOM Wi-Fi, excited beyond belief. While we could only pick one winner for that giveaway, I promised that more would be coming, one more awesome than the other.

Today, I'm glad to announce our 2nd giant giveaway, also sponsored by NVIDIA, with the grand prize of the T-Mobile LG G-Slate 3D tablet with a street price of $750-800 (Amazon $800, T-Mobile $750). This tablet packs even more features than the XOOM and has 3G/4G connectivity built-in.

Note: This prize does NOT come with a data plan of any sort - if you want to hook it up to T-Mobile, it is your responsibility; otherwise, feel free to use its Wi-Fi capabilities.

More great prizes are coming up shortly, so be sure to keep following Android Police on Twitter, Facebook, and RSS.

And here is the winner (picked at random):

@h2oskierc, Chris Grandell from Minnesota, who entered using Twitter on June 1st with this comment "I can haz g-slatez?" - you are now the owner of a brand new LG G-Slate 3D Honeycomb tablet. Congratulations! 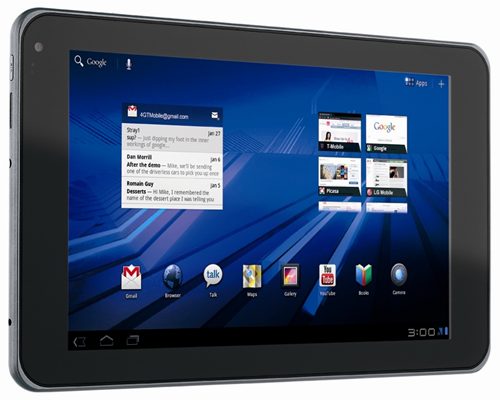 Complete either one of these to be eligible or both to double your chances of winning.

NVIDIA and @AndroidPolice are giving away a free LG G-Slate 3D Honeycomb tablet http://bit.ly/ap-gsl. <PUT YOUR OWN MESSAGE HERE>

That's it - there are no other steps this time around. Very easy, just like last time.

It is open to residents of the countries specified in the detailed terms and conditions below (not just U.S. - check the list to see if your country is there). Note: After careful consideration, we've added Malaysia, India, and South Africa to the list of eligible countries and removed Argentina (due to extremely high import duties).

1 entry per person for each method is allowed (1 for Facebook and 1 for Twitter). Entering more than once on either social site will not increase your chances.

The Contest begins May 20th, 2011 at 1:00 Pacific Time and will continue until June 3rd, 2011 at 11:59PM Pacific Time (the "Deadline"). All entries must be received before the Deadline to be eligible to win the Prize.

One (1) eligible entrant will be chosen by the Contest Provider as the “Winner,” and will receive the “Prize,” one (1) LG “G-SLATE” tablet computing device, estimated retail value $749.99-799.99. No substitutions or exchanges, cash or otherwise, will be allowed. Prize is not transferable.