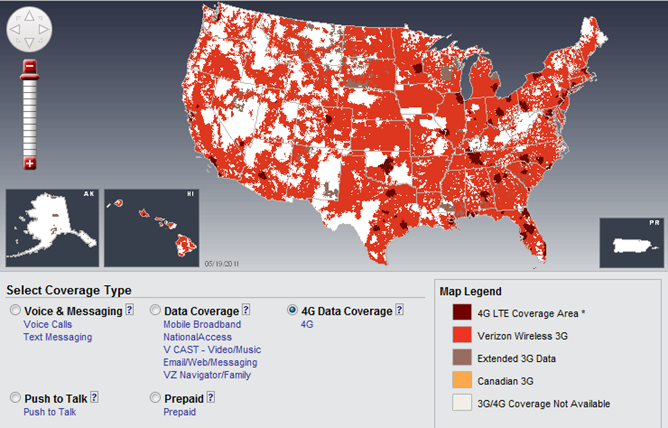 This brings the total number of covered metropolitan areas up to 55 now, which isn't bad considering that VZW just started rolling out LTE in December of 2010.

David Small, chief technical officer for Verizon Wireless, noted, “We’re now offering consumers and businesses in 55 metropolitan areas the most advanced 4G wireless network on the planet, while continuing to offer the nation’s most reliable 3G network coast to coast.  We plan to bring 4G LTE mobile broadband to our entire 3G coverage area by the end of 2013.”

Consumers can choose from several devices to access the blazingly fast speeds of the 4G LTE network, including the newly-launched DROID Charge by Samsung and ThunderBolt™ by HTC smartphones, MiFi® 4510L 4G LTE Mobile Hotspot and Samsung 4G LTE Mobile Hotspot.  Laptop users can enjoy speeds up to 10 times faster than the company’s 3G network with three USB modems from Novatel, Pantech and LG.  In real-world, fully-loaded network environments, 4G LTE users should experience average data rates of 5 to 12 megabits per second (Mbps) on the downlink and 2 to 5 Mbps on the uplink.

When customers travel outside of a 4G coverage area, the devices automatically connect to Verizon Wireless’ 3G network, enabling customers to stay connected from coast to coast.  Verizon Wireless’ 3G network is the most reliable network in the country, allowing customers with laptops and smartphones to download and use cool apps, from mobile social networking platforms to GPS-enabled maps.  Customers can also can rapidly browse the Web to keep up with news, sports, stock quotes, Hollywood gossip and more, work on-the-go with fast file sharing and stream must-see video and customized radio stations.  Customers in 3G coverage areas today who purchase 4G devices will be able to take advantage of 4G speeds when the faster network becomes available in their areas.

As the first wireless company in the world to broadly deploy game-changing 4G LTE technology, Verizon Wireless is committed to building its 4G network with the same performance and reliability for which it has long been recognized.  Verizon Wireless’ consistent focus on reliability is based on rigid engineering standards and a disciplined deployment approach year after year.  The company’s 700 MHz spectrum gives Verizon Wireless specific advantages with 4G, including a contiguous, nationwide network license.

Since 2007, when Verizon Wireless jump-started the global 4G LTE ecosystem with its selection of LTE for its 4G technology, the company has developed deep partnerships to spearhead a broad LTE ecosystem, with many being fostered at the LTE Innovation Center in Waltham, Mass., and the Application Innovation Center, slated to open in San Francisco later this year.