The Streak name, then, does evoke a bit of a grimace for most folks familiar with Android hardware. The Streak 5 wasn't much of a winner, either - particularly because it shipped with the ancient Android 1.6, and had an OS update delay that could only be described in Samsung proportions.

But I really do want to like Dell's hardware. After all, the company has a lot of resources to pour into R&D, and has been making various computer-y stuff for over 20 years now (hard to believe, right?).

Anyway, enough with the past: Dell's got an Android future we need to discuss; namely, the upcoming Dell Streak Pro. The Streak Pro looks to be the chosen name for the device codenamed "Gallo" on a previously leaked Dell ARM roadmap, which, at the time, suggested an Q2-ish release date. The Dutch blog Tweakers seems to confirm that timing, suggesting a June debut for the device.

They also claim the it will be running an overlay (presumably widgets and minor alterations only - as Google policy on Honeycomb requires): Dell Stage 2.0. Now, I honestly liked the Stage UI on the Dell Venue - it just had a tendency to slow things down a bit, and wasn't always 100% stable. Hopefully Dell has worked out the kinks for the Streak Pro.

Additionally, the Streak Pro will be sporting a plethora of accessories, shown below: 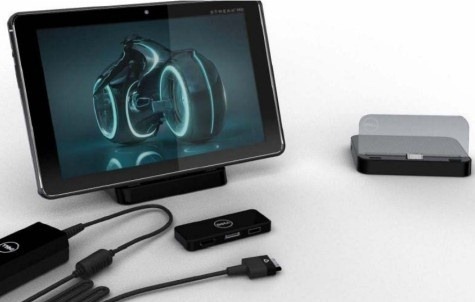 Not pictured is apparently a "productivity dock" with a fold-out keyboard - a feature Dell seems to want to make synonymous with the "Pro" name (see the Dell Venue Pro). The little black box in the center is a charging multi-adapter. The leaked roadmap also indicated handwriting support for the Pro in the future - so we could see a stylus accessory, as well. The Streak Pro will also feature some enterprise goodies, namely: VPN support and Exchange ActiveSync. Huzzah.

The tablet will be running on a 1GHz Tegra 2 processor, feature 1GB of RAM, a 2MP front-facing camera (with dual-microphones for video conferencing), a 5MP rear camera, true dual-band Wi-Fi N, and will weigh in near as makes no difference to a Motorola XOOM (that's heavy - over 1.5lbs). It may also have AT&T LTE support, but this sounds unlikely, unless it will be an add-on ala Verizon XOOM-style, since as far as we know, AT&T's LTE network won't be coming online until Q3 2011 at the earliest.

Still, this thing has potential if it can differentiate itself with good build quality and awesome accessories - Dell could have a real competitor for ASUS's EEE Pad Transformer with the Streak Pro. This is all technically rumor, but it sounds pretty reasonable, so, take it with several large grains of salt.