Many games will try to wow users with amazing graphics or realistic art styles, however, this sometimes comes at the expense of a playable game. Battleheart is a new iOS port that manages to get the best of both worlds: a pleasing art style and an awesome control scheme for a premise that could have easily been tainted by complication.

Battleheart is a sword-and-sorcery RPG where the player is put in control of a four-hero squad that go off to achieve victory, glory and riches. The makeup of the party is completely customizable, courtesy of a tavern in town. Players can recruit a number of different classes, including clerics, tanks, wizards, monks, rogues and bards. Each character plays a bit differently, so it's up to you to figure out a squad that works.

Each character also has a number of skills, stats and inventory slots, allowing a deep level of customization while retaining simplicity. Every five experience levels a character gets a new skill, which is chosen from two possibilities. However, these skills can be swapped if the player finds that he/she doesn't like how they work. 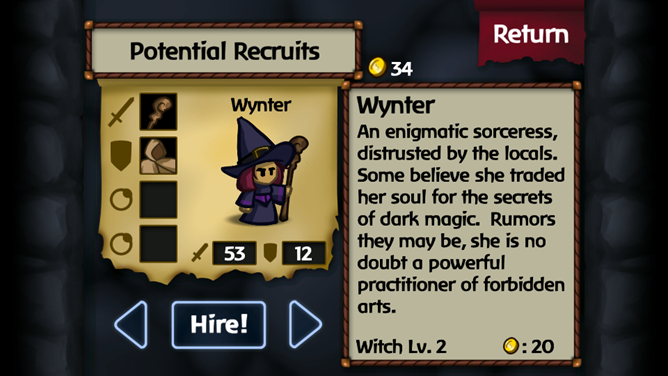 The heroes go adventuring on a number of stages on a map, each of which can be relayed infinitely. This is important, as eventually you're going to hit a wall where the current challenge is a bit too difficult for your current party. By being able to replay prior battles, you can level up your heroes, buy better equipment, or recruit different classes to suit the challenge.

The Controls: Simplicity is Bliss

What amazed me most about this title was the intuitiveness of the controls during combat. Actions are achieved by tapping a hero and dragging an arrow to what you want them to interact with. If a healer's arrow is dragged over a hero, she/he begins healing them. If a soldier's is drawn over an emeie, he will move to attack it. Moving the arrow to open ground moves the character, ceasing all abilities.

I was a bit skeptical of this at first, as some battles demand a certain type of precision. For instance, a boss orc riding a giant boar will toss bombs at idle heroes periodically throughout the fight. It's your job to move them out of the way, all the while keeping an eye on the health levels of the other three heroes.

This all happens, mind you, with numerous other orcs jumping into the fight to help him, and his giant boar periodically charging at you.

After a disastrous first attempt at this boss (in which I learned his patterning), the fight became a lot simpler on my second try. By avoiding his bombs and making sure that my main tank was getting generous healing, I made short work of the boss. I felt amazingly happy at the mechanics of the fight; instead of just tank-and-kill tactics, learning the boss' actions and avoiding them wasn't a pain in the ass.

This is unbelievably important on any game that wants to actually challenge its users. You have to be able to introduce challenge without the mechanics of your game getting in the way. Instead of making multiple menus to navigate in real time, everything I needed for success was right there where I could reach it. 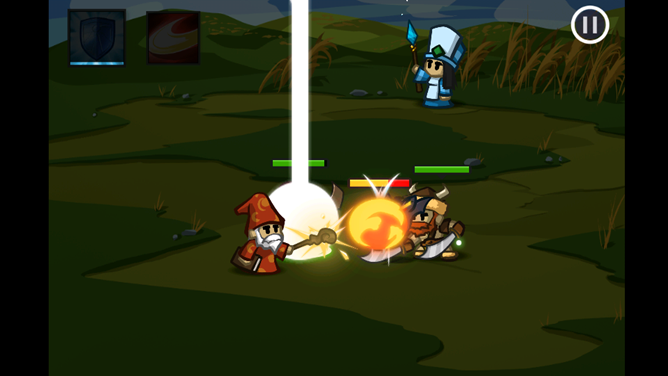 The UI is just one of the things the developer did to make things simple. In another example, all the action of a stage happens on one screen. There is no scrolling involved, or vast areas to get lost in. This works to the player's advantage, as when you can clearly see all enemies and heroes on screen at once, keeping track of their health and actions becomes less of a chore.

The fact that heroes can only do a set amount of actions helps, as well. I don't need to worry about my wizard managing potions or other complicated maneuvers during fights: all I need is for him is to rain down hell on enemies. At the same time, tapping two icons on the top left corner of the screen (seen greyed out, above) buffs my tank's armor and unleashes a spin slash on my enemies. A lot of payoff for just two button taps.

The Style: Cute, but Functional

Battleheart's cartoony style definitely invokes comparisons to Castle Crashers, an Xbox Live Arcade and PSN game which put you in a similar setting of magic, swordplay and gratuitous orc killings. I loved that game because it didn't take itself too seriously and the graphics were clear, crisp and functional. I emphasize that because in a game where chaos is present, the art style really needs to not be in your way. 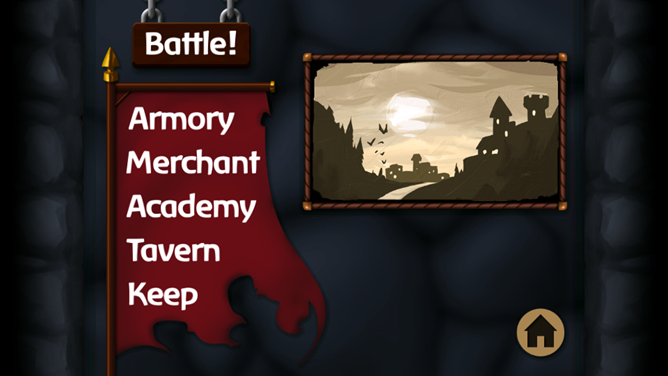 In Battleheart, I can instantly tell who is a friend and who is an enemy. I can pick them out in a crowd, and see their health status. In the midst of an intense fight, I am not cursing the scenery or overly-similar sprites, which is definitely a plus.

The game picks its fight carefully: it forgoes complicated graphics in favor of functional battles, which, at its core, is what the game is about. You can't sacrifice playability for style: a game that looks good but doesn't play well is still a bad game.

Battleheart is well worth your time, and looks to keep your attention with the ability to level up every single one of your party members and swap them out for others with no penalty. This allows for repeated play-throughs with different party members and a unique experience every time. I think this is well worth your $2.99 in the Android Market. Give it a look if you want to quench your thirst for an RPG that plays as well as it looks.

Trillian For Android Sheds Price Tag, But Gains Ads In The Process