Remember the HTC Merge? Yeah, the one that HTC officially announced back in February. Well, it looks like it's finally available on Big Red today, but there's an interesting stipulation with this one: you won't actually find it in any Verizon Wireless store. According to an internal VZW document that fell into the hands of Android Central, you'll only be able to get a hold of this little gem at third-party retailers, like Best Buy. 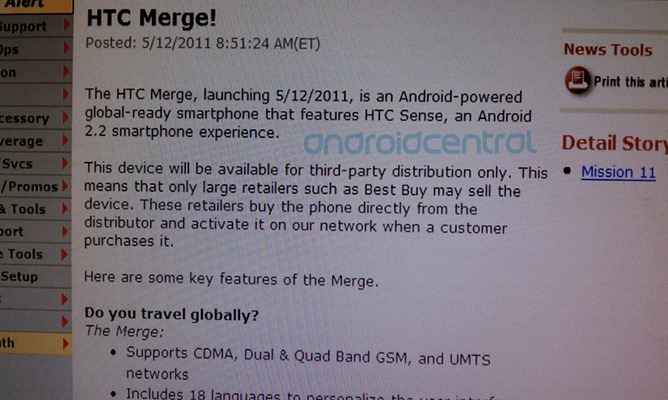 We've haven't actually talked about the Merge in a while, so here's a quick refresher of the specs:

Clearly this phone isn't going to break any records, but aside from the inclusion of Bing instead of Google, it seems like a pretty solid device.

I tried to call my local Best Buy store to nail down a price (or see if they even know what I'm talking about), but they seem to be slacking on actually, you know, opening this morning.

Update: After trying to get in touch with the local Best Buy Mobile all day long, I was finally able to get someone on the phone. Unfortunately, they had no idea what the HTC Merge was, nor when they would be getting it in stock. Has anyone else been able to find this phone today? [Updated] Is The 3.1 Honeycomb Update Already Rolling Out To WiFi XOOMs?