One problem that Android app developers (specifically game developers) have had to face is the size limit for apps in the Android Market, because up until now it's been a measly 50MB. For most apps that is more than enough, but for others - like graphically intense games, for example - it's not even close, so developers had to jump through hoops and implement downloading of additional resources manually. Remember Spectral Souls with its 1GB of data?

Good news, though - today at I/O, Google announced that as of June 2011, the Market will support apps of up to 4GB (well, 4GB + 50MB) in size, which should be large enough to house just about any game we could possibly want on our devices. This support will come in the form of the same 50MB initial download app limit, except with the addition of up to 2 2GB data files, hosted and managed by the Market itself. This takes the  burden off developers and makes it easy for them to publish gigantic apps and games without worrying about hosting and extra implementations. 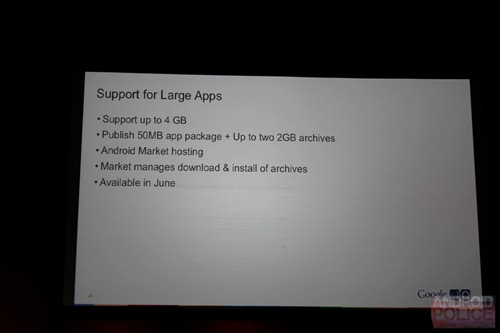 The one problem that could arise out of this new bump in app size, however, is the current return policy, as the 15 minute return window begins as soon as your tap the "Buy" button. If a file is a few hundred megs to a few gigs, that could take quite some time to download. Consequently, Google has also tweaked the return policy just a bit to remedy this issue, and the 15 minutes will begin once the download is completed.

I know that a lot of users would like a larger window for returning apps, but overall this is still a big step in the right direction.