Game ports fall into this weird category where developers have both an easy and difficult job in front of them. On one hand, the game can easily market itself on the nostalgia or hype of the product. On the other, however, they must successfully capture the feel of the original, which can be difficult. 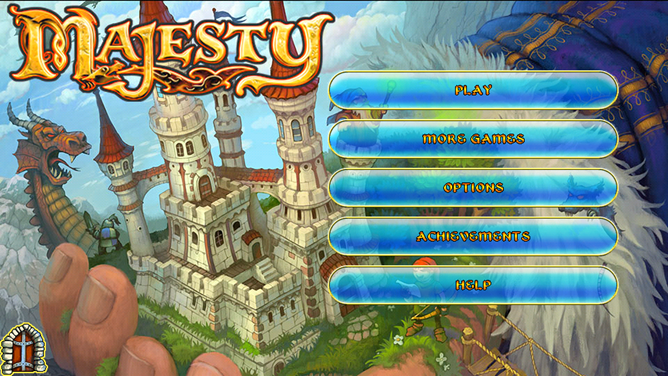 The original Majesty is a bit of a cult hit in PC Gaming circles. You played as the traditional "overseer" of a kingdom and looked to vanquish whatever evil had set up shop within your borders. However, there was a twist in all this: you did not have direct control over the heroes and minions that helped your kingdom run. Instead, an AI took over their actions, and you were left to influence your inhabitants with money, placing "Attack" or "Explore" flags with bounties attached.

The formula was sweetened with the addition of RPG elements. Each hero had their own name, could level up with experience, and could buy the things they needed to complete their journey from the shops you created. Researching healing potions meant that your heroes could buy them; researching a meteor storm spell in the library meant that wizards had a brand new spell at their disposal if they chose to research it. Units could buy new weapons and armor, and you could view individual inventories to read bits of fluff text. Monsters could drop weapons and armor, as well.

Using these methods, players became invested in their heroes - buying a new Ranger meant that he started at level one and was nowhere near as powerful as the level 13 who just bit the dust.

Maintaining your economy became as important as killing monsters: if you didn't have enough gold to direct heroes to threats, they would remain alive to plague you another day.

I love this gameplay style as it allows for a much more cinematic experience. A game of Majesty plays out more like a game of Dungeons & Dragons with you as the Dungeon Master, where you can only do so much to ensure victory, with forces out of your control making that final decision. Humourous dialog and interesting scenario maps with different win conditions (kill the rampaging Goblins, or placate them by explore the map; finding a necromancer would raise dead rats for them to eat) made Majesty a classic. 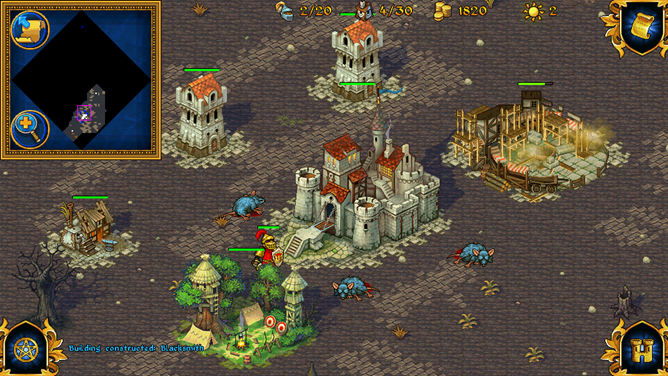 I was naturally curious when I heard that developer Herocraft was porting it to the Android platform. The graphics were changed to be a bit cartoony, but the overall feel of the game appeared to be preserved. Appropriating a point-and-click interface to a touch screen seems like a no-brainer, but I've seen it implemented horribly in the past. As this was one of my favourite gaming experiences, I was more than a little worried.

This feeling vanished as I played it. Like I said above, ports have a challenge ahead of them when it comes to duplicating the experience of a game. Herocraft, however, did it marvelously with Majesty for Android.

The gameplay is identical, save for the combining of a few buildings and the removal of a few heroes. This is done logically, and meant to reduce the amount of things the player has to worry about. Instead of having to build an inn to heal heroes, it's done at their home guilds. Meanwhile, instead of worrying about which of the seven religions conflict with each other, it had been reduced down to three.

The area which concerned me the most - the controls - did not disappoint me, either. Most actions are menu-based, with the odd command issued by a quick double-click. This can get complicated when multiple units are stacked on top of each other, but the situation is easily remedied by a pop-up stack menu. However, navigating this menu while trying to cast a heal spell can be a bit unwieldy, especially when your level ten paladin is about to get smacked down by a troll.

Overall, I was left with the best possible feeling about a port, which is that I didn't feel like I was playing a port at all. In my mind, I was 10 years old again, trying in vain to keep minotaurs from bum-rushing my market and pleading for that wizard not to cast a fireball on a vampire protected by a spell mirror. I made the same "dumbass" comment an hour ago when that spell reflected in his face, killing him. Herocraft needs to be commended for putting together the authentic Majesty experience, which happens to be a damn good one.

However, there are some faults. While the original had a pretty idiot-proof autosave function, this game does not. While it hasn't happened to me personally, I have heard reports of games being erased due to interruptions like phone calls. I have had the game flat-out crash to a black screen, also; this happens without warning, and I haven't been able to replicate the conditions it happens in. Even though it doesn't happen often, it's infinitely frustrating to see a bunch of work go down the tube. Hopefully this will be fixed in later patches, because it's the only black spot - and sadly, it's a big one - on an otherwise perfect game. Save often.

Majesty: The Fantasy Kingdom Simulator is available for £1.99, which rounds out to roughly three bucks. There is a lite version of the game which constricts difficulty to the lowest setting, is ad-supported and possibly limits levels (no description was available on the differences).