Update: It's up for sale yet again today, Saturday, May 7th.

Woot.com, Internet's favorite a-deal-a-day site that I personally religiously check daily, is offering up an Android tablet deal today that may be hard to pass up for those looking for a beefy, yet budget, Android tablet.

Considering the gTablet is currently listed on Amazon for $381.57, and the best deal we've seen to date was Sears at $350, the Woot deal is quite a steal. Add the fact that gTablet is one of the easiest tablets to root and customize with a variety of available ROMs, you've got yourself a very decent Android tablet with hardware specs that fly and a price that doesn't bite.

Oh, and read the product description - it's hilarious, as always (I'm saving it here because it'll disappear when the deal expires):

OF COURSE YOU CAN TRUST A CORPORATION

Lots of people have tried to compare the ViewSonic gTablet with an iPad. We want in on that too.

There are already plenty of side by side comparisons to help you decide between a ViewSonic gTablet and an iPad. But why should you have to go to some other site? We’re selling it today, aren’t we? Of course we’re going to be totally biased the most completely objective and fair. So, in the interest of making you spend money, here’s our highly informative point-by-point break down that we researched without any sort of bias whatsoever.

It’s well known that the iPad makes you look cooler, as long as you already look cool when you take it out. But did you know that the ViewSonic gTablet saves you serious money, which lets you invest more in the science of looking cool? But then again, trying to be cool is so uncool… isn’t it? Aw, this question's too hard, let’s call it even.

Winner: Draw unless you actually work at an Apple store. They probably don’t want you hanging around with a ViewSonic gTablet.

Like a six year old who won’t eat meat that’s touched the peas, the iPad very specifically supports Apple files and doesn’t care that the files you find tend to use .avi most of the time. You can buy it from them or get to steppin’. On the other side of the spectrum, this ViewSonic gTablet supports DivX, H.264, WMVnatively, as well as WMA, MP4 and MP3, MPEG and AAC. There’s also a front camera and about ten hours of battery life. And is that a faint smell of lemon each time you click the play button?

Winner: ViewSonic gTablet unless you also prefer Betamax and HD-DVD. It takes all kinds…

Thanks to the amazing strength of irritating corporate leadership, the iPad uses a network that can often annoy you by not finding the cellular data network for long stretches of time. The big empty spaces can really make you wonder why you’re actually paying for their service in the first place. So the ViewSonic gTablet bypasses all that and only supports Wi-Fi to begin with. It doesn’t even pretend it’ll find a cellular data network! Even better, there’s no mandated monthly connection fee, except maybe the coffee you’ll have to buy in order to keep the table while you surf.

Winner: ViewSonic gTablet unless you don’t live near a ahem nameless coffee shop. And these days, how is that even possible? They own more land than Queen Elizabeth.

Winner: iPad unless you think Bluetooth is a standard or something.

Want to stand on a street corner trying to hold your tablet steady while people stare at you like you’re some sort of idiot? Only the iPad offers a built-in digital compass! Alternatively, you could also just buy a teeny analog compass and put it on your keychain.

Winner: iPad unless, you know, you don’t take a tablet computer when you go for a hike.

Much like their lovely one-piece iPhones, Apple’s iPad is built around one simple premise. If you ever run out of room, you can buy a new iPad any time you want. How simple! How easy! That’s nothing like the crude design of the ViewSonic gTablet, which for some stupid reason includes a Micro SD slot, a Mini USB port, and a standard USB port, all combining to let you add and subtract data at any time like a sucker.

Winner: ViewSonic gTablet unless you use “I have to go home and sync tonight” as an excuse to get out of a terrible date.

Connect to the iTunes store to download new games over that cellular data network that may not actually work! That’s the iPad’s method, and it’s what’s made the iTunes store so profitable for them. Of course, the ViewSonic gTablet can’t use that exclusive technological boutique. That’s why it comes with Angry Birds preinstalled. Also, there’s Pandora, the Kindle app, Color Note, and you can connect to the G-market if you ever need more.

Winner: ViewSonic gTablet unless you only want a tablet forsnicker productivity.

iPad users know from experience what that little brick icon means. Thankfully, the feud between Apple and Adobe seems to be cooling, because you can at last download and install some additional app to give you access to the Internet you’ve been missing, as long as you don’t mind viewing it through that app exclusively. Isn’t that good design? On the other hand, we’ve got the ViewSonic gTablet and… Oh, look at that! Nothing to install, it just works! How simple!

Winner: ViewSonic gTablet unless you’re convinced that everyone will be using HTML 5 by summer.

Want an iPad? Be ready to use OS X and iTunes, or Windows XP, Vista or 7 with iTunes, or possibly some future operating system and iTunes. Sort of like when your best friend got married to that horrible person you can’t stand, iTunes is going to be there always. Every. Single. Time. Whereas the ViewSonic gTablet doesn’t judge your choice of MP3 players. You can even use it with Linux if you really wanna. It’s cool. Do what you feel.

Winner: ViewSonic gTablet unless you’re a marketing VP. “Brand lifestyle” is so much easier to sell.

Adding it up, we see that… oh! What a surprise! The ViewSonic gTablet is today’s clear winner! Heads up, all you people who have no interest in iPads, because we’re arbitrarily scientifically confirming your bias. Why not take a victory lap by buying a ViewSonic gTablet today? Think of it as a chance to say “Sorry, iPad fans. Today you just don’t measure up.”

… but check back later, iPad fans, because eventually we’ll have iPads again. And when that day comes, we’ll have 100% factual data proving you correct! Um, completely unbiased data, of course. No agenda here.

So, who is picking one up? 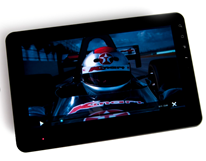 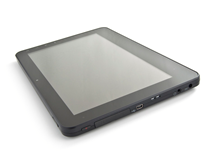 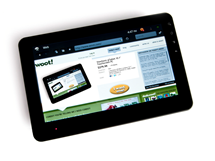 Source: Woot - thanks, Jonathan and Mike