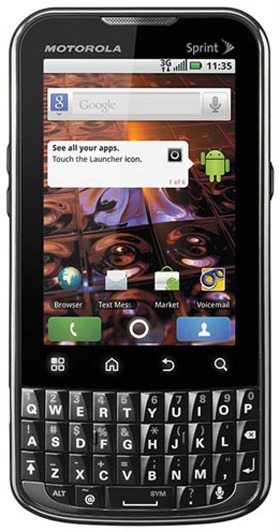 The XPRT is geared towards business users, and it's the first Android handset on the Now Network to sport enterprise-class security and data encryption. It's set to ship on June 5 for the moderately reasonable price of $130 with a new two-year agreement. 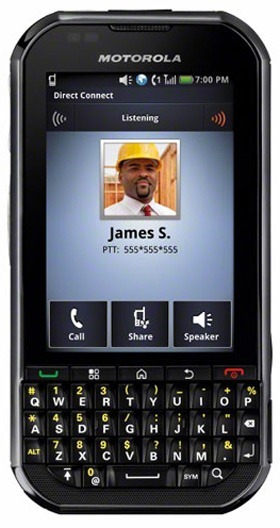 The second device announced this morning, the Motorola Titanium, is set to replace the Moto i1 as a push-to-talk device on Sprint's iDen network. I guess Motorola decided to bring back the dead with this phone, as it's running Android 2.1 (that's not a typo, it's actually running Éclair). I'll let you soak that up before I go on.

It features the same 3.1 inch screen that's in the XPRT along with a similar style QWERTY and a 5MP camera, but there's no word on other hardware specs or availability for this one - only that it will arrive "this summer," making it even more outdated than it already is.

The one benefit of this device (other than the fact that the BLUR skin actually looks better than the XPRT) is that it's dust, shock, and pressure resistant, along with being able to handle a broader temperature range than your average phone.

“We are pleased to extend our portfolio of products directed at business-users with these two powerful and versatile Android devices,” said Paget L. Alves, president – Sprint Business. “Motorola XPRT delivers the security features enterprise customers demand without scrimping on the latest in technology, while Motorola Titanium is a rugged Android smartphone with Nextel Direct Connect’s sub-second Push-to-Talk.”

Motorola XPRT will be available on Sunday, June 5, in Sprint Stores, Business Sales, Web sales (www.sprint.com) and Telesales (1-800-SPRINT1), for $129.99 with a new line or eligible upgrade and two-year service agreement. Pricing and availability for Motorola Titanium will be announced at a later date.

“Motorola XPRT and Motorola Titanium blend feature-packed consumer experiences with an optimal set of productivity and security tools,” said Jeff Miller, corporate vice president of sales, Motorola Mobility. “We are pleased to partner with Sprint to deliver each of these unique business-ready devices to their continuously growing enterprise customer base.”

Enterprise managers and workforces across field service, field sales, healthcare, retail, utilities, manufacturing and transportation/distribution industries will benefit from its feature-rich capabilities, enterprise-class security and data encryption. Motorola XPRT delivers business-class security features with 256-bit AES data encryption and controls the IT department will appreciate, including the ability to remotely handle functions like enabling pin or password lock, password recovery and data wipe on both the phone and SD card if lost or stolen.

Motorola XPRT requires activation on one of Sprint’s Everything Data plans, plus a required $10 Premium Data add-on charge for smartphones. Sprint’s Everything Data plan with Any Mobile, AnytimeSM includes unlimited web, texting and calling to and from any mobile in America while on the Sprint Network, starting at just $69.99 per month plus required $10 Premium Data add-on charge (pricing excludes surcharges and taxes).

Sprint also offers great value with international service add-ons for Motorola XPRT. For just $4.99 per month, the Sprint Worldwide Voice Add on offers discounted rates while traveling in more than 100 countries. For only $2.99 per month, you can make local calls in Canada, call back to the United States and even receive calls in Canada for just $0.20 per minute. That’s a savings of $0.39 per minute over standard roaming charges. While roaming in Canada, Mexico, China, and other destinations data rates start as low as $0.002 per KB (on CDMA networks).

To sign up to learn more about Motorola XPRT, please visit www.motorola.com/XPRT.

Killswitch: Automatically Put Your Device To Sleep When You Put It In A Case Or Turn It Upside Down

Zipcar Beta Hits The Market, Renting A Car Has Never Been Easier