One of the more interesting features of the HTC Flyer is its use of a digital pen, but up until now there has been little talk of its availability. The Digital Pen allows you to write on basically anything you see on the Flyer, including web pages or input boxes, using HTC Scribe technology. I think that there was speculation that the Flyer would come with the digital pen, but that doesn't appear to be the case. The pen has popped up on BestBuyBusiness.com for the not-so-low price of $80, which, given the $500 price tag of the tablet itself, brings the entire package up to almost $600. 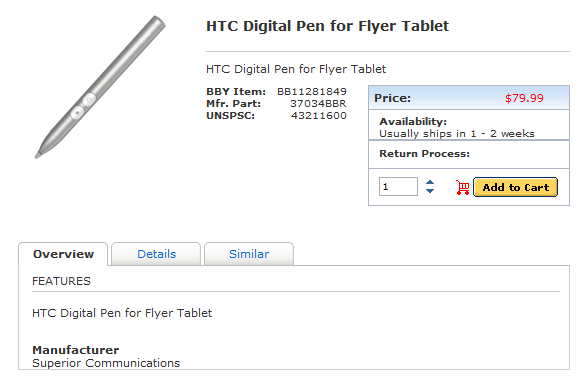 Of course, for business users or students, I could see how the addition of the pen would be clutch in the use of the Flyer. After watching the video, I was immediately in love with the idea of the digital pen, because I have wanted some sort of typing/writing hybrid solution for quite some time now. If you haven't seen the video, check it out (if you just want to see the pen, it starts at around 1:11):

I really think that this is a perfect example of "hardware isn't everything." With all of the cookie-cutter Honeycomb tablets on the market, I think that HTC is doing something truly unique and inspiring. While it may not have a Tegra 2 processor, HTC is really offering an experience that you can't get anywhere else, not the mention the fact that we know Honeycomb is in the Flyer's future.

With all things considered, how do you feel about the Flyer?

Update: It looks like Droid Life has gotten word from HTC that the digital pen will not be included with the Flyer.

Update 2: According to Engadget, the pen will only be absent from the Best Buy version of the Flyer. This is bad news for those of us in the US, as the Flyer will be available exclusively from Best Buy at launch.