CyanogenMod 7.0.3, an incremental release for CM 7, is now live at cyanogenmod.com. While we're waiting for the official changelog from Cyanogen himself, I can tell you that it does not contain Android 2.3.4 (it's still based off 2.3.3) - that's been saved for CM 7.1 (if you can't wait for 2.3.4, you can update to it by using the nightlies). It does, however, contain important security fixes, among other things. We'll update this post as soon as we get the details.

This update contains a bug fix for our update notification system, as well as an important security fix. It is recommended that all users running a version of CyanogenMod prior to 7.0.3 update to this release.

The details of the security fix should be released within a few weeks. You can find out about what exactly the security fault was if you snoop around the code commits, but I am not at liberty to share anything publicly at this time.

Update #2: Cyanogen says: "Don't flash 7.0.3 if you are on Supersonic or Speedy, we made a mistake. Fix coming shortly."

"CyanogenMod 7.0.3.1 will be coming out shortly for the EVO and EVO Shift due to the WiMAX bug. Oops!" - @DrMacinyasha.

Update #3: "Also, if you are running a CM 7.1 nightly, don't try and downgrade to 7.0.3! The nightly builds already have the security patch!" says Cyanogen. He adds, "The 7.0.3 update is *ONLY* for people using 7.0.2* stable builds. You'll hose your system if you install it on a nightly from the last week."

As always, you can check whether your device is supported and updated to 7.0.3 and grab the update for it here. 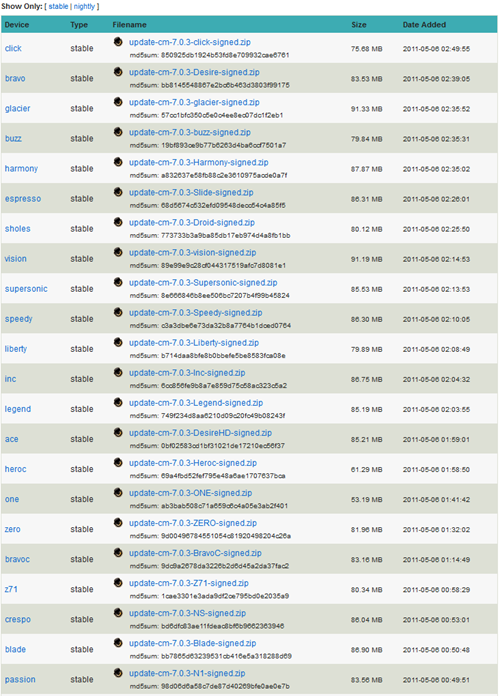 Hell Freezes Over: App Sideloading Coming To AT&T - Maybe The World Really Is Ending This Year

[New Game] Pinball HD For Tegra 2 Devices: This Is The Pinball Game You've Been Waiting For ...