Unfortunately, because he had to modify the apk, he needed to sign it with a different key, which means you need root to install this version (you won't be able to install it over the original Google Talk app as an update due to mismatched signatures, which means you need to uninstall the original app first, and that's not possible unless you're rooted - Google Talk is a system app).

While most people are reporting at least partial successes, some are experiencing installation errors or force closes, so your mileage definitely may vary. Those who install successfully are also split between a fully working app and one that is missing video in one direction - they can see the other person, but that person can't see them. The only way to know for sure is to try it yourself. Don't worry - if you make a backup as per instructions, you can always go back to the original as if nothing happened. 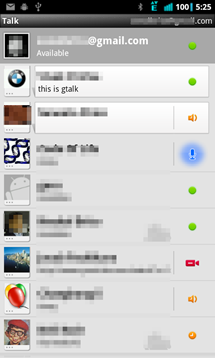 If for some reason you can't write to /system and would like to use a flashable zip instead, it's available in the xda thread as well.

Now get to installing! If you post your successes or failures below, please include your Android version, exact ROM you're using, and your device's model.

[Leak] An Early Look At Gingerbread For The T-Mobile G2x