The only problem is, the tablet isn't exactly available - it's still on backorder, so Target warns that it will begin shipping "in 2 to 4 weeks." Of course, shipping will set you back another $7.95, and you'll still be paying taxes, so chances are you either won't be saving too much off the original $400 price, or you'll be paying more, whereas with Amazon you could forego both those additional costs. Unfortunately, Amazon doesn't have any in stock yet either (in fact, it's powered by Target as well), so the Target deal is probably the best one around at the moment.

Bonus: another 5% off by using the REDcard, if you've got one. 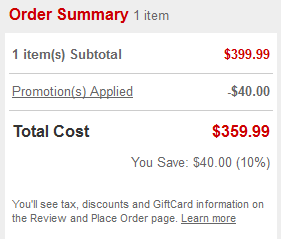 [Weekend Poll] What's Your Next (Or Most Recent) Tablet Purchase, If Any?