Shazam, the music tagging service that listens to a song and tells you what it is, has announced today that the free version of their app will support unlimited tagging until January 1st, 2012. While this is pretty cool if you're a Shazam user who doesn't want to pay $5 for Shazam Encore (or didn't grab it what it was Amazon's app of the day), it's still pretty laughable for people who have been using Soundhound the whole time. While I can appreciate what Shazam is doing here with the help eBay, who is sponsoring this unlimited tag-fest, I can't help but feel that Shazam should've done this on its own a long time ago. Either way, you get free tagging for now, and that's pretty neat. 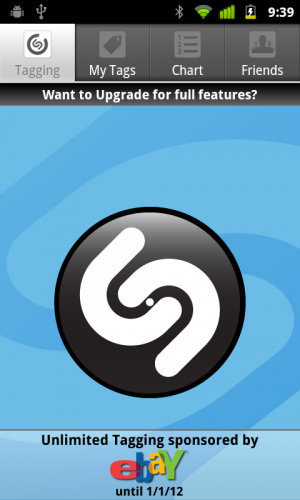 Here's a snippet from the press release and a link to download Shazam so that you can stop Googling lyrics all day:

London, UK – 28 April 2011 – Shazam®, the world’s leading mobile discovery company, today announced a major update to its Shazam App for Android which brings with it two exciting new features: unlimited tagging sponsored by eBay for all Shazamers using the Shazam Free App and “Shazam Friends”, a real-time feed within the App of songs that Facebook friends have tagged, creating a continuously updating list for Shazamers to discover and share new music with their friends.
This is the first exclusive App sponsorship deal agreed by eBay anywhere in the world, and the first time Shazam has selected a partner to provide free services to their customers.
Alex Musil, Executive Vice President of Product Marketing at Shazam said, “eBay is a brand people know and love, and we’re excited to announce them as our exclusive sponsor, bringing all Android Shazamers the benefit of unlimited music discovery.” Musil continued, “In addition, we’re pleased to offer Android Shazamers access to the Shazam Friends social feature, allowing them to share their music discoveries with their Facebook friends and family while discovering exciting new music and content themselves in a continuously updating feed.”
This update of the Shazam Free App – which usually comes with five tags per month – will enable new and existing users to receive free unlimited Shazaming until January 1, 2012.

The Wifi-Only HTC Flyer High-Fives the FCC, Gets Clearance For Landing

DROID 3 Display And Digitizer Assembly Shows Up Online, Is This Really The Targa?