According to a tipster at Droid-life, the Motorola XOOM will be receiving a (relatively minor) system update tomorrow, and no - it doesn't include SD card support (exactly why, we can't even begin to guess). Here's the list of changes and additions:

Generally, this update seems to fix a lot of bugs and add support for some more technical items - nothing to get too worked up about. But Bluetooth mouse support and Bluetooth in Google Talk are certainly welcome additions to the XOOM's feature set. The update should be available tomorrow.

Update from Artem: Here's the official update document, which also adds "Encrypted passwords can be entered during power up," which doesn't make a whole lot of sense right now (passwords for encrypted devices are already entered at power-up). If this, however, means I only need to enter the password once instead of twice, I will be ecstatic. 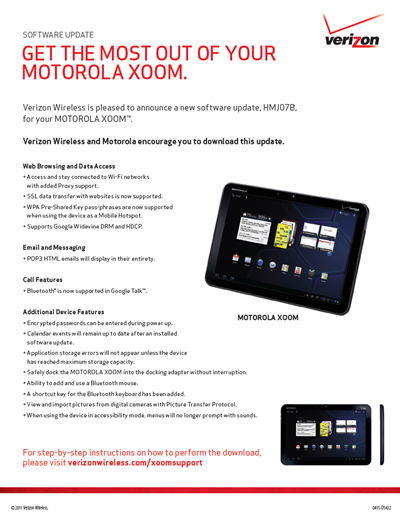 Want HSUPA On Your Motorola ATRIX Right Now? Fret Not - XDA Has You Covered