We Android fans love our input methods. Luckily there is no shortage of options, with keyboards ranging from the standard Gingerbread keyboard all the way to wacky ones such as 8Pen. Despite all the competition, and the fact that it isn't even available on the Android Market, Swype is one of the most popular custom keyboards around. It makes the tedious act of touchscreen typing that much smoother by letting users glide their thumb from letter to letter rather than tapping.

There are a number of imitators on the market today that try to implement this swiping method of text input, and HTC Sense 3.0 is said to be bringing another into the mix. In a hands-on with the HTC Sensation, the Android Central team went digging in the keyboard menus and found something called HTC Trace. 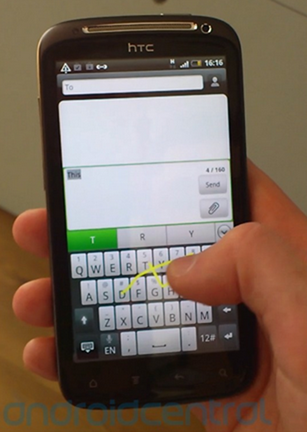 Not only does this bring the Swype style text input, but there are also a number of options to help improve your accuracy while "tracing". One such option allows users to select the thickness of the tracing line to increase the tracing accuracy of those with fingers on the sausage-y side.

It sounds like a fair bet that HTC Trace is a part of Sense 3.0, and not just unique to the Sensation. Hopefully we will see this feature come to the EVO 3D and all other future HTC devices, and no doubt it will be ported to Sense 2.X phones by all the awesome Android developers out there.