Yesterday, we told you that the Acer Iconia A500 tablet was available at Best Buy for $450, but if that wasn't your cup of tea, to wait one more day. That day has passed, and now the 16GB ASUS Eee Pad Transformer is available for $399 making it the most bang-for-your-buck Honeycomb tablet on the market. While the Transformer may be a very economical Android tablet, that doesn't mean that Asus skimped on specs: 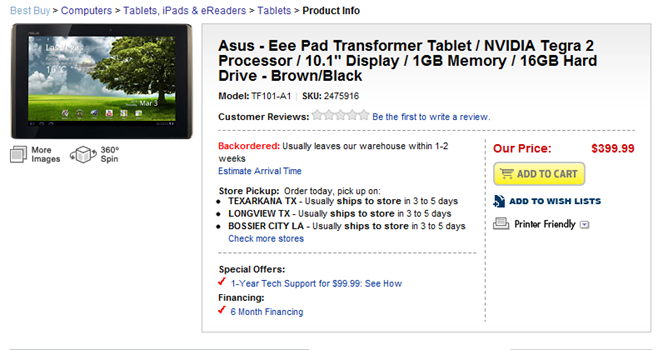 It looks like the 32GB version isn't available just yet, as I couldn't find it on Best Buy's website. Unfortunately, the 16GB version is currently backordered As I was typing this, they sold out online. I guess that's what happens when you release a top-of-the-line product at a bargain-barrel price.

ASUS had previously stated that the device would be available in relatively small quantities at launch in US markets, and that it would instead be focusing its energy on a UK release, for the time being. This almost immediate sell-out at Best Buy, the US's largest electronics retail chain, would seem to confirm that this hasn't changed. Hopefully Asus can step up production before the Eee Pad is just old news.

DROID Incredible 2 and Casio G'zOne Commando Join The DROID Charge - All Coming To Verizon On ...