Remember the massive-screened Samsung Infuse 4G that was announced back in January? If not, that doesn't come as much of a surprise, as this phone has found a way to stay out of the rumor mill since then. It couldn't stay silent forever, though, and now it has finally surfaced in a Walmart circular, accompanied by a $178.88 price tag (presumably with a new two-year agreement on AT&T). Unfortunately, there isn't an exact launch date listed, only that it's "available May 2011." 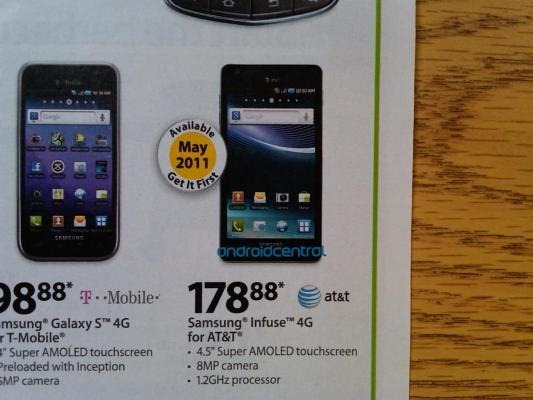 I'm sure a quick spec rundown is in order, so here you go:

As you can tell, this phone is nothing to turn your nose up at. But if AT&T/Samsung can drop this phone at a (rumored) price of less than $200, then why can't VZW do the same with the DROID Charge?