Earlier this week, I dropped a hint on Twitter that we have a few awesome giveaways lined up here at Android Police, and I really wasn't kidding.

To start things off, NVIDIA and Android Police have teamed up to give away a free Motorola XOOM Wi-Fi edition. The dual-core Tegra 2 tablet can be yours - all you have to do is enter by following the rules below.

More great - even better - prizes are coming up shortly, so be sure to keep following Android Police on Twitter, Facebook, and RSS.

And here is the winner (picked at random):

@keef319 (Keef) from Walkern, United Kingdom, who entered using Twitter on April 23rd with this comment "Go on..Turn from the dark side, Android is your friend," you are now the owner of a brand new XOOM Wi-Fi tablet. Congratulations! 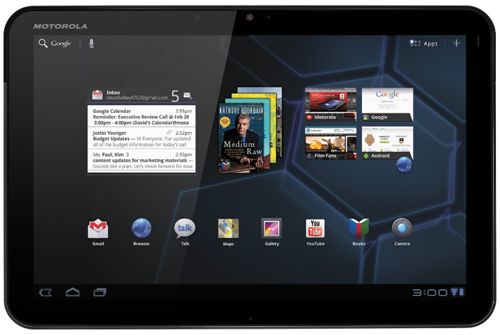 This contest is now over. We have selected the winner - see if it's you above.

Complete either one of these to be eligible or both to double your chances of winning.

NVIDIA and @AndroidPolice are giving away a free XOOM Wi-Fi at http://bit.ly/ap-xoom. <PUT YOUR OWN MESSAGE HERE>

Aaaand that's it - there are no other steps this time around. Very easy, as I promised.

The giveaway starts immediately and runs until May 6th, 11:59PM PST.

1 entry per person for each method is allowed (1 for Facebook and 1 for Twitter). Entering more than once on either social site will not increase your chances.

International Entrants: Please ensure your country is listed in "1. Eligibility" of the Official Rules, and particularly remember that you will be responsible for any and all import duties, fees, taxes, or other costs (excluding the shipping carrier charge) associated with importing the device into your country, as indicated in "4. Prizes"

The Contest begins April 22nd at 5:00 Pacific Time and will continue until May 6th at 11:59PM Pacific Time (the "Deadline"). All entries must be received before the Deadline to be eligible to win the Prize.

One (1) eligible entrant will be chosen by the Contest Provider as the “Winner,” and will receive the “Prize,” one (1) Motorola “XOOM Wi-Fi” tablet computing device, estimated retail value $599. No substitutions or exchanges, cash or otherwise, will be allowed. Prize is not transferable.

HoneyReader Is An Android Feed Reader Made Specifically For Honeycomb