Update: It looks like the homescreen is just a generic placeholder, because it's the same one used here for the Optimus V at Best Buy. Thanks Nate!

This may not be of interest to the 7 people out there that actually like Motorola's Blur interface, but for the rest of us this is pretty good news. It looks like Motorola is prepping a new DROID-esque Android 2.2 device for Virgin Mobile USA, and it appears to be sans-Blur in the one leaked picture that Pocketnow has obtained. 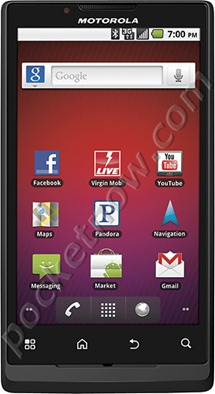 With that said, it looks like the device may still be running some sort of a custom interface, judging by the three-column homescreen grid, which is not currently possible with stock Froyo's four-column launcher.

There is really no other information available about this handset as of right now, so let's all just keep our hopes up that Motorola will release this in all of its vanilla-like glory.