nate2569, a user over at the XDA forums, received not one, but two mysterious updates on his ATRIX yesterday evening. The first one was a software update to bring the system up to version 1.75 and there was some initial confusion, so nate2569 uploaded a picture displaying some of the "About Phone" contents for proof. Have a look: 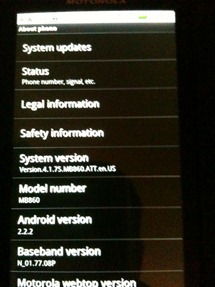 Notice anything special? It appears that the first update brought the current Android version up to 2.2.2, which came as an unexpected surprise. Naturally, the next thought was "maybe this is the HSUPA update," and users prompted nate to run a speed test. The results all but verified their theories - 2.4Mbps down and .9Mbps up on the first run. The upload speed is three times faster than what AT&T currently allows, giving good reason to believe that the HSUPA update is in this bundle.

Great, right? Sure - but here's where it gets a little strange. nate was prompted to install a second update, which brought the system up to version 1.83. After the second update, another speed test was run - 2.9Mbps down and 1.6Mbps up. At this point, there was little doubt that this is the HSUPA update everyone has been waiting for. 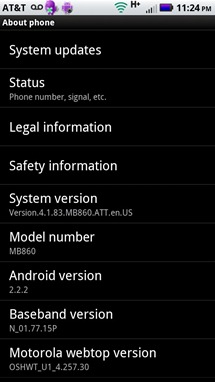 Since no one else in the source thread was able to pull an update, this begs the question "why just nate?" Some users started digging in and asking questions, such as when and where he got his phone. This is where things get really interesting - nate says that he "did not get [his] phone from a store and this may be a 'test' release for reasons [he] cannot talk about." This strongly suggests that he may be using a developer unit and this is the reason for the updates.

What does this really mean? If nate is, in fact, legit about this update and it's not a clever Photoshop edit (which he specifically denies that it is), it means that there could be an update on the horizon for ATRIX users. If not, shame on him for making me write all of this for no reason.