If there's one thing we still don't know for sure about the Toshiba Android tablet, it's its name. At this year's CES, when the product was first announced and demoed, Toshiba refused to give up the name, simply referring to it as "the unnamed Toshiba tablet." The company then followed up with the site named just TheToshibaTablet.com, leaving us guessing and puzzled as to why it takes months to give a gadget a name. Then came guesses - Antares and ANT were both considerations, but it now seems like both were actually wrong (or rather, could be internal names) and the real name of the tablet will be...

While we can't confirm the name officially just yet, here is what we do know:

Here's one of the trademark filings: 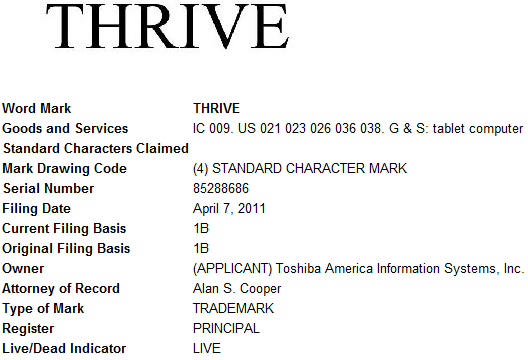 So, adding 2 and 2 together at this point seems like a no-brainer - the flagship Toshiba tablet doesn't have a name when suddenly, the company registers a slew of domains and files for a trademark all related to "THRIVE." Of course, it's possible they have yet another tablet cooking up, but I find it unlikely that they'd be concentrating on an unannounced device before shipping this one.

I just have one question: how mad are the naming masterminds about the LG Thrive that came out just a few days ago?

Thanks, Babyfacemagee, for the investigative work!

[Unconfirmed] Is An HSUPA-Enabling Software Update Coming For The Motorola ATRIX?