There's little that we didn't already know about HTC's upcoming DROID Incredible 2, but if there was any lingering doubt on your mind, you'll be happy to hear that Droid Life has acquired the official spec sheet for the device: 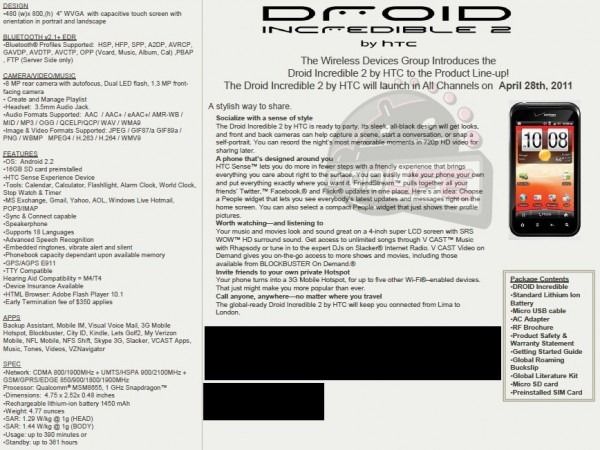 Indeed, the Incredible 2 will feature a 1GHz Snapdragon processor, a 4-inch SLCD display, SRS WOW HD surround sound, a 16GB microSD card, an 8MP camera, and Android 2.2 out of the box. But you probably already knew that.

What you might not have realized is that the phone will sport a global radio, meaning that, just as with the DROID Pro and DROID 2 Global, you'll be able to connect to a GSM network (likely Vodafone's) while abroad. Unfortunately, this dual GSM/CDMA connectivity comes with a price: no LTE.

As we heard previously, the Incredible 2 will launch in "All Channels" on April 28th, though its price has not yet been publicized. However, given its comparatively small display, rather diminutive SD card, and nonexistent 4G radio, we wouldn't expect its price tag to be too high - a welcome difference from some of Verizon's other future handsets.