Flipz, the developer of Fresh ROM for the EVO 4G and the HTC Hero, has been quiet since the release of Fresh 3.5, and it's no surprise - Sprint hasn't pushed out anything to our beloved EVOs in months. Since Fresh is a Sense ROM that follows official releases, as opposed to being built from AOSP like CyanogenMod, I didn't really expect to see another Fresh release until either the next leak or an official Sprint release.

With the arrival of a test build carrying Gingerbread for the EVO 4G yesterday, the situation changed - while being a test ROM, it seemed relatively fully baked and signed by Sprint's release keys, meaning its authenticity was undisputed. Flipz moved fast - after only a day, Fresh donors can now download Fresh 4.0 Beta 1 and test out just how well Gingerbread runs on their phones.

If you haven't donated, you'll have to wait until all spotted bugs have been squashed and the ROM is ready for public release. In the meantime, feast your eyes on the glorious changelog, including the new fast boot option that will allow your phone to reboot in seconds: 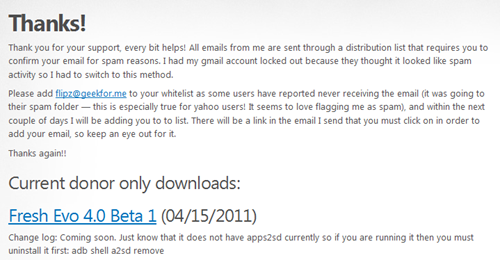