If there's one thing that most rooted users love to do, it's flash their devices. While ROM Manager has always made flashing new ROMs particularly easy, what about new kernels? ROM Manager does support kernel flashing, but it's pretty basic compared to the app's other features. That's all about to change though, because XDA member Shinzul along with TeamWin have been working on a ROM Manager-esque app for kernels, appropriately named Universal Kernel Manager. 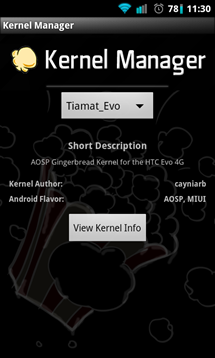 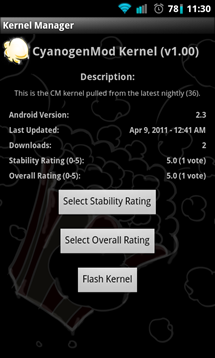 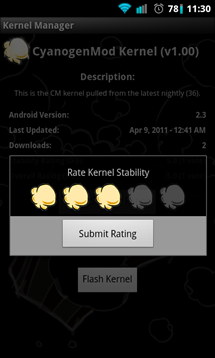 The idea is simple: Kernel developers will submit their kernels to TeamWin, where they will be uploaded to a centralized location and readily available to download via Universal Kernel Manager. You can then look through the list of kernels (each with a brief description so you know what you're flashing), download the kernel, and flash it all from within the app. It will automatically format the cache partition, as well as the Dalvik cache.

Users will also be able to rate kernel stability, which will not only prevent other users from flashing buggy kernels, but also help developers to make their kernels more stable.

UKM is primarily being developed on the EVO 4G with support for other devices in the works - though we have no idea what devices fall into the "other" category right now. It's not quite ready for download just yet, as the devs are working on getting kernel developer support in order to populate the app, so keep your eye on the source thread for the latest info on the project.

Update: It's now live on the market, and a YouTube video has been uploaded. Check it out!