For those who have been paying attention, it's pretty clear that the mobile space is exploding, thanks largely to the rapid adoption of Android, iPhone, and, to a lesser extent, Windows Phone 7 devices. With that in mind, it should come as no surprise that Best Buy is planning to expand their stand-alone Best Buy Mobile brand by 600-800 locations over the next five years.

Best Buy's been a fairly major player in the Android space, often offering phones at a steeper discount than the carriers in order to attract new customers. That strategy seems to be working, so keep an eye out for a Best Buy Mobile springing up in a mall near you.

If you haven't had your fill of business jargon for the day, take a gander at the press release below.

MINNEAPOLIS – April 14, 2011 – Today, at a company-held meeting for the financial community, Best Buy Co., Inc. (NYSE: BBY) intends to outline its strategic growth plans for its domestic and international businesses.

Senior executives are expected to review the initiatives that will support the company’s strategic priorities, which focus on accessing a larger market, profitable new growth opportunities, and structural opportunities.

Fiscal 2011 Results
In addition to the results previously announced on March 24, 2011, the company will discuss the following additional details regarding its fiscal 2011 performance (unaudited): 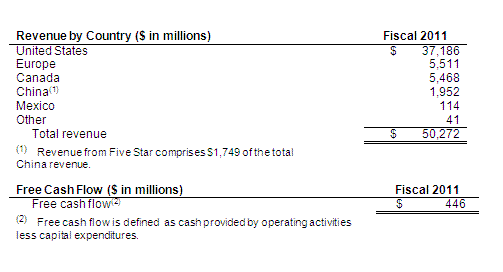 The Best Buy Investor and Analyst Day will be held today, Thursday, April 14, 2011, at the company’s corporate campus in Richfield, Minn. The conference will begin at 10:00 am CT and will be available in its entirety through a live webcast and replay on www.bby.com. Presentation materials also will be publicly available on the Investor Relations page of www.bby.com.