From today's "probably should have seen it coming" pile, Engadget has come into possession of what looks like a presentation slide for a ruggedized Android tablet being developed by Motorola: 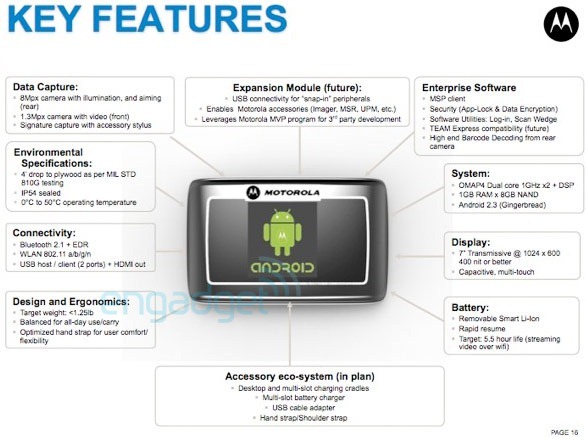 I know, the text is illegible, so here are the main points to take home:

This device is clearly targeted towards business, and probably specifically towards businesses with employees out in the field, where the tablet's ruggedized nature will protect it from the harsh, plywood-filled world.

Most notable, perhaps, is the fact that it runs Gingerbread. This is probably security-related. As Google has said, Honeycomb isn't actually finished, and that "corners were cut" to speed its development in time for the release of the XOOM. Even as the first manufacturer to release a Honeycomb device, Motorola is probably more in-the-know in regard to Honeycomb's enterprise security readiness than anyone. Either that, or this is just an outdated slide.

Regardless, such a specialized tab is probably going to be running a lot of specialized software - who knows how far buried under overlays the Android OS could be. And if Google really isn't allowing manufacturers to muck up the Honeycomb UI too much during its pre-release period, Motorola's only viable choice might be Gingerbread for now.

Motorola also appears to have big plans for accessorizing the tablet, including a stylus and a number of dock options. We'll see how this rumor pans out in the coming weeks.

NVIDIA Sets The Record Straight: "We Will Support All Tegra Devices As Long As Their ...