No one ever accused Boost Mobile of overachieving on the Android phone front, and the carrier's latest announcement doesn't really do much to change that. Indeed, just as expected, Sprint's little tagalong used its recent press conference to unveil its first CDMA Android handset: the Samsung Galaxy Prevail. 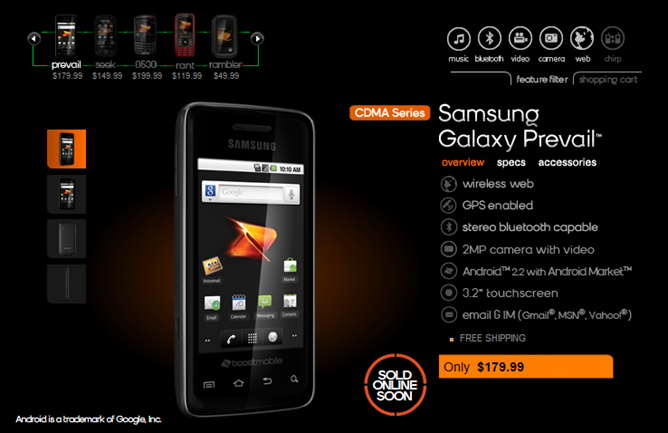 With an itsy-bitsy 3.2-inch display, a measly 2MP camera, and a tiny 2GB microSD card out of the box, the Prevail isn't about to blow anyone away - but then again, we geeks probably aren't Boost Mobile's target demographic here. And seeing as the Froyo-equipped device will set you back a mere $179.99 off-contract - $20 less than most smartphones cost with a two-year agreement - it might just win over a few new customers when it launches later this April. A few.

Catch the full press release below:

IRVINE, Calif. (BUSINESS WIRE), April 05, 2011 - Boost Mobile, the top carrier in the recent 2011 J.D. Power and Associates Wireless Non-Contract Customer Satisfaction Index StudySM, unlocks the power of Android with the introduction of the Samsung Galaxy Prevail™, available exclusively with Boost Mobile on the Nationwide Sprint Network. As the first CDMA Android device on Boost Mobile, the Galaxy Prevail is designed to provide an uncompromised Android experience while maintaining the great value of Boost’s $50 Monthly Unlimited plan with no hidden fees and no contracts required.

Boost Mobile unlocks the power of Android with the introduction of the Samsung Galaxy Prevail(TM), available exclusively with Boost Mobile on the Nationwide Sprint Network. (Photo: Boost Mobile)

”We are excited to partner with Samsung to launch this innovative touchscreen phone for wireless users who are interested in upgrading to an Android experience without spending more on their monthly plan,” said Andre Smith, vice president-Boost Mobile. “The Samsung Galaxy Prevail delivers the power of the Android platform to our customers’ fingertips while bringing tremendous value to our customers’ wallets.”

The Galaxy Prevail will be available on Boost Mobile’s $50 Monthly Unlimited with Shrinkage plan, where the longer you stay, the less you pay simply by making on-time payments. For every six on-time payments, a Boost Mobile customer’s monthly cost will shrink by $5, eventually getting down to as low as $35 a month for unlimited nationwide talk, text, Web, e-mail, IM and calls to 411. Payments do not need to be consecutive to qualify for the next savings milestone. The first wave of Boost customers will be hitting their first six-month milestone this month and will be paying $45 per month for Monthly Unlimited service.

With Android, consumers can create their own arsenal of fun and productivity by selecting from more than 100,000 applications. In addition to the features listed above, the Galaxy Prevail’s preloaded applications include SCVNGR™, Poynt™, Twidroyd™, Facebook©, Hookt™, ThinkFree Office© and YouTube©.

Customers can also protect their Samsung Galaxy Prevail with Phone Insurance that is now available for Boost Monthly Unlimited customers. For $5 per month customers are covered if their device breaks, is lost, stolen or damaged – even by liquid. Go towww.boostmobile.com for more information.

Boost Mobile, one of Sprint’s prepaid brands and recently recognized by J.D. Power as Highest-Ranked Non-Contract Company in Overall Customer Satisfaction Performance, offers wireless phones and services with no long-term contracts. Boost Mobile redefines value for wireless consumers with its $50 Monthly Unlimited with Shrinkage no-contract service where the longer you stay the less you pay with on-time payments for unlimited voice, text messaging, Web, e-mail, IM and calls to 411. Boost Mobile offers nationwide service on the Nationwide Sprint Network, reaching more than 277 million people, and on the Nextel National Network, reaching more than 278 million people, with no activation or long-distance fees. Boost Mobile offers a selection of quality handsets from Motorola, Sanyo, Research In Motion (RIM) and Samsung, ranging from entry-level to high-end devices available nationwide at nearly 20,000 major retail stores, including Best Buy, RadioShack, Target and Walmart, Sprint retail stores, independent wireless dealer locations, and on HSN, a leading TV home shopping network. Re-Boost® cards are available at approximately 100,000 locations throughout the United States. Experience Boost Mobile on the Web at MySpace, Facebook and Twitter; and purchase products atwww.boostmobile.com.

Epic Games Not Available On Android, We Have The Carriers To Thank

T-Mobile Launching Even More Plus Unlimited Plan For Just $59.99 A Month