An independent test conducted by a research firm in New York City comparing the speeds of Verizon's and Sprint's respective 4G networks has made at least one thing clear: Big Red owns the Big Apple. After conducting over 1000 individual network speed tests in various locations throughout the city, BTIG Research tallied up the averages, and it's not a pretty picture for Sprint:

The connections were tethered through an HTC Thunderbolt and an HTC EVO 4G, respectively

You're seeing that right - Verizon's 4G LTE is averaging a whopping 10.3Mbps (down) when on a laptop tethered to an HTC Thunderbolt, while the EVO 4G barely eeks out 1.6. The difference becomes even more apparent when comparing the network's speeds while tethering an iPad 2. It would appear the cat's out of the bag, and Sprint should rightly be embarrassed.

Now, this is all bound to lead to a lot of Sprint WiMAX success stories in the comments, so let's be clear - this really only applies specifically to the NYC area, though the researchers did mention that these results were generally representative of their experiences across the US. On the flipside, I've heard good things about Sprint's WiMAX coverage in Los Angeles, so take that with a grain of salt. Still, NYC makes for a true network torture test zone, one Sprint should be working fastidiously to cover. 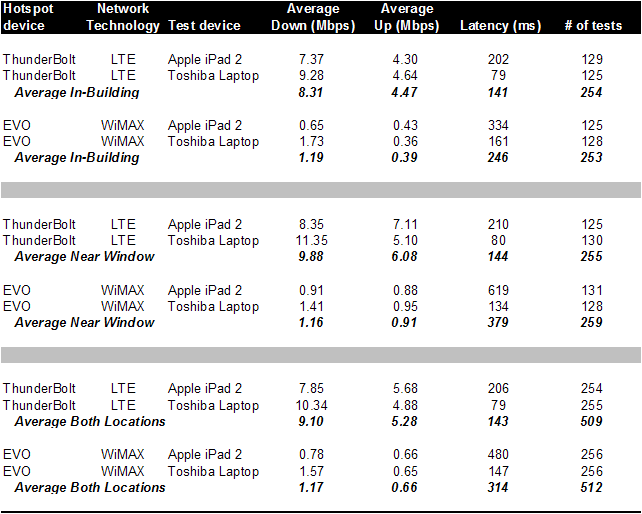 So what didn't this study do? It didn't compare network latency (which is a pretty key factor in real-world "snappiness"), and it didn't compare speeds during peak traffic hours, the latter of which is of paramount concern when you live in a densely populated urban area. LTE has a massive advantage over older 3G technologies in both of those arenas, so it'd be interesting to see how WiMAX stacks up.

Either way, this isn't great news for Sprint, especially as the T-Mobile / AT&T merger will lead to yet another LTE competitor coming into the market, isolating Sprint's choice of WiMAX like the awkward kid at the 4G prom. Sprint's CEO Dan Hesse has repeatedly affirmed the carrier's commitment to WiMAX, but Sprint has never ruled out adopting a second 4G tech - something that seems very likely at this point.

BTIG notes that Clearwire is refusing to expand its WiMAX network or make any other 4G-related capital investments until it reaches a new agreement with Sprint, a deal that is still under negotiation, putting the brakes on Sprint's 4G-ification efforts.

Of even more interest, though, is the pilot LTE network Clearwire is currently testing in Phoenix, AZ. Could Sprint and Clearwire continue their partnership with a focus on building out both LTE and WiMAX networks simultaneously? It's certainly possible, but this could have undesirable consequences for customers, as Sprint's upcoming 4G devices support only the WiMAX standard.

Such a decision would also beg the question "why?" There seems to be little benefit to consumers in developing two 4G networks at the same time, likely at the detriment of the expansion of both. Why not focus on a single solution? Sprint clearly has some tough questions to face regarding its 4G strategy, questions Dan Hesse has pledged to answer in the coming months.

But for now, it would seem Verizon has quickly become king of the 4G hill.

Android/Mobile April Fool's 2011 Roundup From Across The Web