Prev
Posts in the last
24 Hours
sorted by
Hottest
Next
Update: If you haven't caught on yet, you should probably check out the date on which this post was published.

This special Android Police project was brought to you by:

Amazon's been making waves in the Android blogosphere recently with such new products as the Appstore and the Cloud Player, but it looks like they're not done yet; in fact, they're only just starting. According to the same source who tipped us about the Appstore a few months back, the company will be launching the Blaze, which looks to be a smartphone of pretty high caliber, come August - and in a sentence, there's a lot to look forward to.

Up to now, Amazon's forays into Android territory have been purely software-related. With the Blaze, however, the company is adding formidable (and seriously lust-worthy) hardware to the mix - have a look at the phone's spec sheet:

It's not just figures, however; if you're not convinced of that, even the briefest of glances at the following product images should be enough to change your mind: 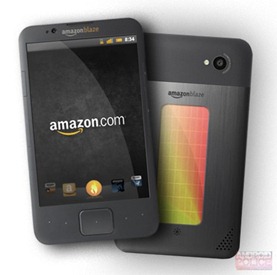 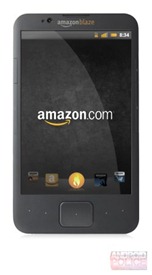 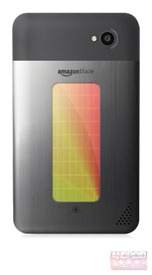 As you can probably tell from the images above, Amazon has really gone all-out on the Blaze's design - a significant departure from previous products. It's all very streamlined, with a black matte visage and an aluminum battery cover that reportedly "feels just right when held against your face, situated in your pocket, or placed in your hand."

But form hasn't triumphed over function; quite the contrary, as Amazon has made good use of the Blaze's rather large footprint. Unlike most other manufacturers, Amazon hasn't abandoned non-touchscreen navigation - the Blaze will feature a roomy D-pad as well as two pairs of previous-/next-page buttons that should come as a welcome addition to avid readers.

We're told the smartphone's rear 5MP camera isn't anything to write home about, though video chat quality with the 1.3MP front-facing imager is apparently quite impressive. What's really mind-blowing, though, is what lies below the cameras - on the front, a 4.3-inch Mirasol display; on the rear, a solar panel. While solar panels on phones past were ugly copper strips, the Blaze's is made of an entirely new material that is - or at least appears to be - as aesthetically pleasing as it is functional when it comes to charging your phone.

As for the Mirasol screen, our tipster said that while it's not exactly the crispest or brightest mobile display he's seen, it is unique in its own right. For example, Mirasol doesn't require any sort of backlighting to display text/images, meaning that it is extremely energy efficient. Additionally, performance in direct sunlight is outstanding, and even tree-huggers have something to rave about - Mirasol significantly reduces carbon dioxide equivalents.

But as intriguing as the Blaze's hardware may be, software is also involved to some degree - the handset will serve as the debut device for Blaze UI, Amazon's answer to the HTC Senses and Motorola MOTOBLURs of the world. The version our tipster played with was strictly beta firmware and therefore full of bugs, crashes, and barely functional software. Nonetheless, we were pleasantly surprised by what our source did manage to see - for example, one of Blaze UI's highlights will be its excellent integration with Amazon services. Everything, from documents on your Cloud Drive to products you've recently purchased from Amazon.com, is accessible from the Blaze in one form or another - in fact, Amazon accounts are said to be as key to the Blaze's user experience as Google accounts are to a regular Android phone.

Amazon also plans to spice up Gingerbread's (already appealing) user interface with Blaze UI - page turning animations, for example, are visible throughout the experience, and the whole operating system now has a more orange look about it. Finally, we have some good news for those of you concerned about fragmentation: Amazon plans to be much more expeditious with software updates than competing manufacturers, and as you've seen so far with the latest product unveilings, they can move quite fast.

Excited? Don't hold your breath - while Amazon engineers are working around the clock to get the device out ASAP, it isn't expected to go on sale until August. On the upside, we're hearing that its price tag will be "highly competitive." Expect to see a press release and more official details later this month; in the meantime, a leaked product page and a gallery of Blaze-related images lie below: 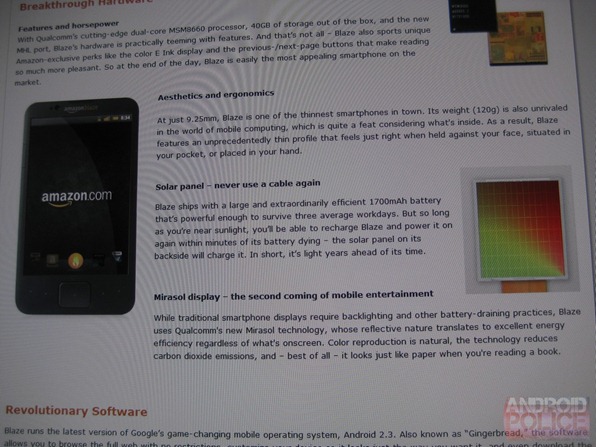 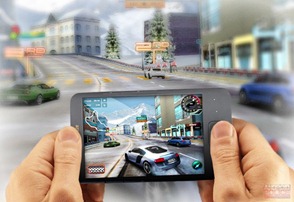 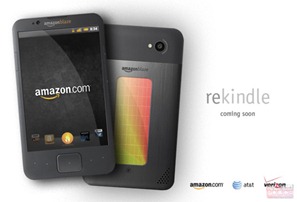 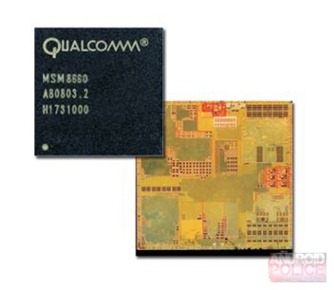 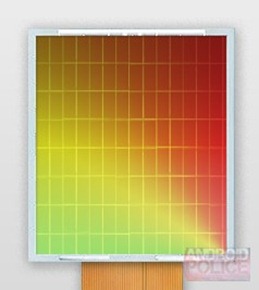