"Great news, everyone!" Last week, Google launched the new in-app billing capability of the Android Market into private beta testing, promising a public release this week, if all went well. Apparently, all did go well, as the company today opened this most-exciting feature to everyone. To be fair, iOS users have been enjoying in-app billing in the App Store since 2009, so Google's move is quite a bit late (don't make me bring up the whole copy-paste thing to balance the argument!).

Want to buy a new downloadable level or music track in your favorite game? No problem - as long as the developer implemented /in-app billing, you'll be able to charge it straight to your card via the usual Google Checkout procedure.

The first games to utilize in-app billing are:

Theoretically, in-app billing should eliminate the need for the split Lite/Paid application model because in order to sell upgrade keys, Android developers won't have to reinvent the wheel with their own in-app or off-Market purchase systems. I, for one, welcome our new billing overlords. 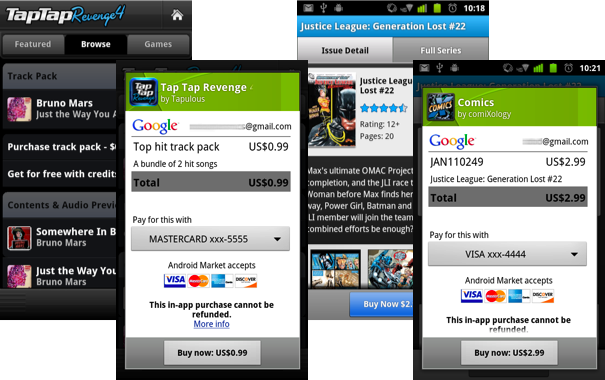