On March 22nd, the long awaited Amazon Appstore was released, bringing a whole new way to find, install, and share apps on Android. After its initial debut, we decided that this new Appstore was the real deal. In this post, we'll break down what Amazon's done right, and what it still needs to improve on. 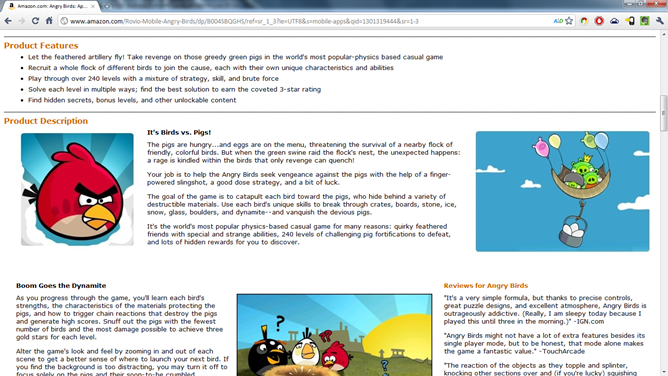 Most users will tell you that finding good Android apps is not an easy task. If you're browsing the Android Market looking for something specific, then the only bit of information that you have to work with is what the developer wants to say (which usually isn’t much) and one-line-comments from other users. Amazon handled the Appstore commenting system in a way that makes sense –  the same way that they do for every product. If you’ve ever looked at Amazon, you know that it is a great go-to place for discovering what real users are saying about products, and it's no different in the Appstore.

Some of the comments that that I looked at were almost review-worthy in their level of detail. One of the best parts of the commenting system, though, is the thread-like conversations. This allows the developers (or other users) to directly respond to individual comments, encouraging  effective communication - unlike the standard Market.

The descriptions are also much better, offering a more versatile, rich environment for developers to put their apps on display. Not only are the Product Descriptions much more in-depth, but if you look at the desktop Appstore, there are easy-to-read bullet points that highlight recent updates as well as a quick rundown of the app's features.

2. Free Premium App of the Day

Who doesn’t like free premium apps? So far, this has been one of my favorite things about the new Appstore. They have already offered quality apps like Angry Birds Rio and Swiftkey Keyboard free of charge, and while they haven’t said exactly how long they can keep this policy going, the longer it lasts, the happier we'll be.

3. You can test drive apps within the browser (for apps that support this feature) 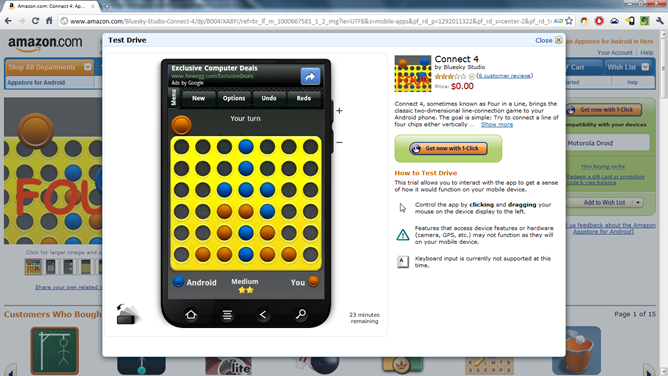 Since there is a no-return policy (more about that in a bit), Amazon's done the next best thing – nay, one better – and provided users with the ability to "test drive" apps. The test drive emulates an Android device right in your browser, so you can try before you buy. Right now not all apps support this feature, but Amazon makes it really easy to find out which ones do. I would love to see more apps support this, so I encourage all developers to embrace it!

You may be thinking, “Wait, how is this a pro? The Android Market has a one-time fee of $25!” This is true, but it's more likely that only serious developers are going to be willing to pay $100 per year to have their apps available in the Amazon Appstore, thus giving us more quality apps and less, well, crap.

Now everyone will know what to buy that Android-lover in their lives around the holidays! These are not typical Amazon giftcards, they're specific to the Appstore. How cool is that? And for us, it will make coming up with prizes for giveaways that much easier (hint hint).

This one is a deal breaker for a lot of people, because we've all at one time or another paid for an app that was not quite what we thought it was going to be. Hopefully, more developers will start to embrace the “test drive” feature, which might even be preferable to returning an app anyway.

2. The Installation Process is Much More Annoying

In the native Android Market, installing an app is a simple tap-tap, and everything else is automated. This is not the case with the Amazon Appstore, which requires the sideloading of apps in order to work. I realize that this may not be the biggest deal for most users, but I often install apps via desktop and never touch my phone during the process, which is just not possible with Amazon’s Appstore (yet).

3. Not Available on AT&T or In Countries Outside of the US

This one is clearly a big deal for all parties involved. I mean, how many Android owners have been left out in the cold here? In all fairness, Amazon claims that “AT&T is working on enabling purchases from the Amazon Appstore in the near future” (more about that here), and it is worth noting that rooted users can access the Appstore. There is no word on when users outside of the US will gain (legitimate) access.

This one is another deal breaker for a lot of people. For now, the developer decides whether or not they want to include DRM in their app, it's not by any means a requirement. What this means for the end user is if a developer decides to include DRM in their app, (and many do) then you will not be able to run that app unless you have the Amazon Appstore installed and you are signed into your account. Maybe then we can start labeling phones “Amazon Experience Devices.”

This is the double-edge sword of the group. On one hand, exclusive apps seem like a good thing, right? Maybe, as long as you are not an un-rooted AT&T customer or from outside the US. In a sense, it also forces users to use the Amazon Appstore. On the other hand, if you do not fall into the aforementioned categories and you already use the Appstore, why not reap the benefits of apps that you can’t get elsewhere?

This is, of course, a very early look at the Amazon Appstore and by no means a definitive guide. I’m sure that in the future a lot of the Appstore's shortfalls will be worked out, and new ones may arise. The pros will remain, more developers will embrace the beautiful thing that is the Amazon Appstore, and we will all be merry. Until then, I’m going to play Angry Birds Rio. Did I mention that it is free and exclusive in the Amazon Appstore?