If there is one thing I love, it’s a nice, relaxing wallpaper. I do not want to see chaos when I look at my homescreen (or computer screen for that matter), and the Go Wallpaper Dev Team has delivered a solution that is both elegant and beautiful by way of three new live wallpapers – Sakura Falling, 3D Skyrocket, and Hyperspace. Because they use OpenGL, these are some of the smoothest, most realistic live wallpapers that I have ever seen.

By far the most relaxing of the three, the Sakura Falling live wallpaper features light pink flowers falling across a dark fuschia background. When you touch the screen, the flowers move away from your finger in all directions, like rippling water. You can control how fast the flowers fall, as well as the quantity, but in order the change the background color you’ll need to purchase the full version. 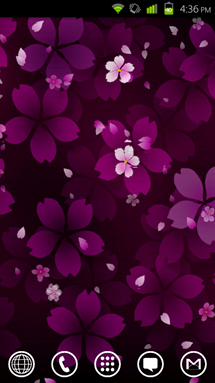 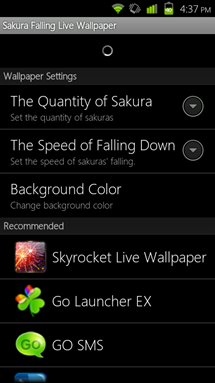 The 3D Skyrocket live wallpaper features a 360 degree camera rotating around fireworks. The realism in the fireworks is simply amazing - everything from the bloom to the tail and smoke is so detailed, it’s almost like watching a video. You can control the quality of the blooming effect, whether or not clouds and/or stars appear, and the density of the stars, but you won’t be able to interact with the wallpaper until you pick up the full version. 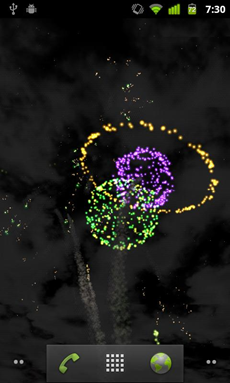 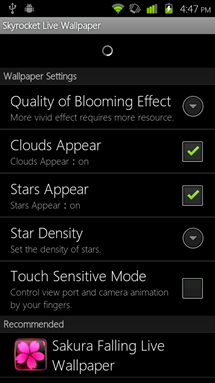 Have you ever wanted to take a journey through a wormhole? If you answered yes to that question, then you need the Hyperspace live wallpaper, because that is exactly what it is. At the end of the wormhole, you end up in a star field with exploding galaxies all around. If you don’t like all that movement on your homescreen, then you can turn off the wormhole (time tunnel) or slow it down. You can also control the star density and size, but you’ll need the full version if you want to control the entire scenario, including the depth of the star field, size of the viewing area, and the resolution of the view. 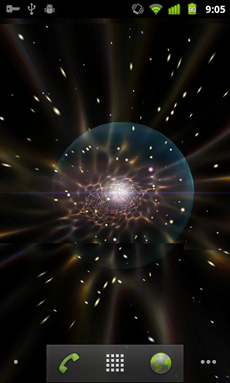 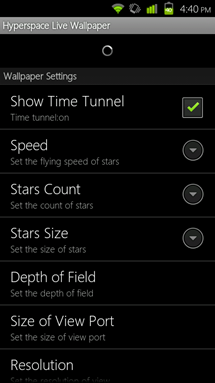 The Go Wallpaper Dev Team has done an incredible job of making some of the highest quality, most customizable live wallpapers that I have ever had the pleasure of using. My favorite of the three is probably Sakura Falling, but you can’t really go wrong with any of them. 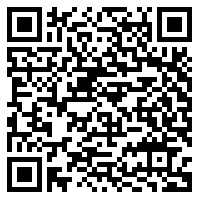 [Updated] HTC Insists Android Kernel Sources May Be Published "When They Are Ready," Rather ...