The 2011 Formula One season is set to start this Sunday, and what better way to kick it off than with the introduction of the official F1 timing app for Android. 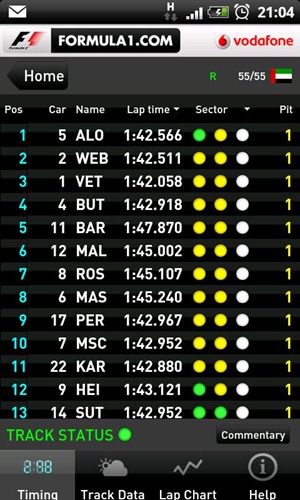 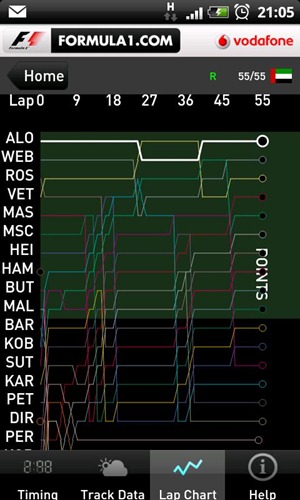 There have been a number of F1 apps available in the Android Market, however they have all had their shortcomings. Some have been slow, some have prematurely crashed, some have had cumbersome and ugly interfaces, and some just plain did not work. So, I am ecstatic that Formula1.com have finally decided to launch their own app, and I can't wait for the Australian Grand Prix this weekend to test it out.

The F1 app will stream real-time data straight from the track informing the user of all the stats and information for the on-going race. In fact, the information the app receives will be the same as what the teams themselves rely on when advising the drivers on strategy through every session during the weekend.

Some of the features of the app include:

Aside from giving you up-to-the minute information on the race and track itself, you can also browse through the practice, qualifying and previous race results, view the race timetable, season calendar and championship standings.

The app has been available to iOS users for some time now and, as promised earlier this month, it is now also available to Android users through the Android Market. The app requires you to register (for free) on the Formula1.com website, but it will run without the need for registration during the Australian Grand Prix.

Hands-On Video And Photos of The HTC View 4G The Super-Thin Samsung Galaxy Tab 8.9 And 10.1: As Seen From Outside A Glass Box