Moments ago, after months of preparations and precisely on the rumored release date of March 22nd, the Amazon Android Appstore finally went live.

Update: The Amazon App Store is now back up, but it looks like it's US-only. Also, the Test Drive is not available anymore, at least for now.
If the appstore is still down for you, try downloading the app using this direct link to the appstore APK (I got it via an SMS from Amazon): http://amzn.to/getappstore. You should be able to log into your account, browse, and download apps this way.

In the best traditions of Amazon's content presentation, each listing contains multiple screenshots as well as a nicely formatted description that is far more versatile and appealing than anything we've seen in the Android Market. Of course, don't forget Amazon reviews - they work exactly the way you think and can be text or video (it looks like you don't need to actually download something to review it, which should probably be fixed).

It goes without saying that you will need to install the Appstore client on your phone before downloading any content, which you can do by entering your phone number on pretty much any page of the site. 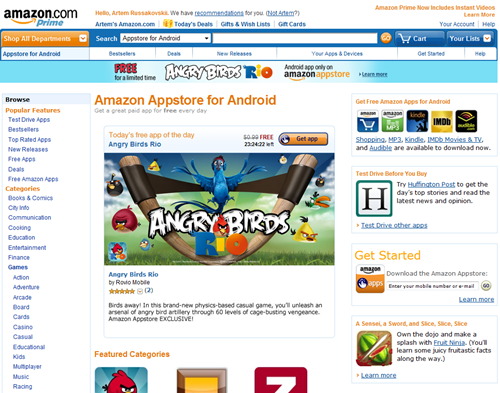 There are a few interesting details to point out.

Some of the apps support a full preview mode, which Amazon called Test Drive, which allows you to take them out for a spin right in your browser window. On the client side, it's using Flash, while the actual code runs on Amazon's EC2 servers in the cloud.

I've tried this with Traffic Jam, the results of which you can see below. It's pretty impressive - you can rotate the screen, and the buttons work pretty much as expected. There is some awkward lag, understandably, but the preview functionality serves its purpose completely. 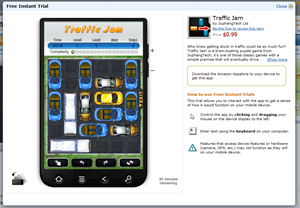 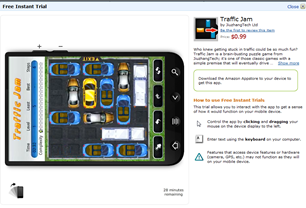 Free Premium App Of The Day

Every day, Amazon is going to feature a premium app for free. This should give the store continuous traction and is very similar to the daily Goldbox deals that have grown very popular on Amazon's primary site.

This brings me to the next point. You guessed it - the first free premium game is...

Usually $0.99, the first free premium app of the day is, you guessed it - Angry Birds Rio. 60 new levels and a completely new game style await:

All in all, I am VERY impressed with the new store. I have no doubt that it will be highly successful and will surely give the Android store itself a run for its money. Your opinions may differ, so hit up those comments down below and let us know what you think.

Source: Amazon Appstore, with some help from TechCrunch

Apple Sues Amazon Over Use Of 'App Store' Name