Prev
Posts in the last
24 Hours
sorted by
Hottest
Next
Today it has been apparently confirmed that the name will be Droid Charge (not that we ever doubted the original sources). Engadget has obtained the following image, which clearly shows the name of the phone from what appears to be an unknown retailer's internal system:

Have you been itching to get onto Verizon's speedy LTE network but just aren't sure that the HTC Thunderbolt is the right phone for you? New options are likely just around the corner, as more details are surfacing for what will be the second or third LTE smartphone on Big Red. The Samsung handset formerly referred to as the Droid Stealth will be released as the Droid Charge - and, if a leaked internal document from Costco is correct, it will be launching on April 7.

The Costco leak shows pre-orders for the phone starting this Thursday, March 24, with the official launch two weeks after that, on April 7. Droid Life has reported that multiple trusted sources confirm the name Droid Charge will be the branding on the LTE phone, which sports a 4.3" super AMOLED screen, 1GHz Hummingbird processor and an 8MP rear camera with a 1.3MP front-facing cam. 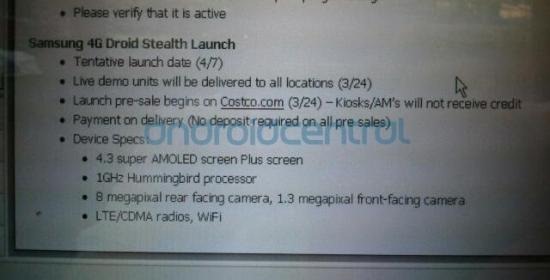 So for those of you foaming at the mouth to jump on what is easily the fastest network in the US, does this change your feelings about the Thunderbolt, or are you still on board with HTC's initial offering? ... or perhaps the Droid Bionic (also likely to release soon) will be your cup of tea? Be sure to let us know below.

Galaxy Tab 8.9 And 10.1 Revealed By Samsung - Razor-Thin And Priced To Sell