While AT&T and Verizon both announced dual-core devices at CES (Atrix 4G and Droid Bionic, respectively), T-Mobile and Sprint have been quiet about their offerings. It was only through accidental leaks that we found out about the LG Optimus 2X, rebranded as T-Mobile G2x, coming to T-Mobile and the EVO 3D coming to Sprint.

Now, after being spotted at CTIA, the G2x really had nowhere else to hide, so T-Mobile decided to finally officially unveil it to the public. As expected, the G2x sports a dual-core 1GHz Tegra 2 processor with a 4" capacitive display, an 8GB ROM, an 8MP rear camera with 1080P video recording, a 1.3MP front-facing camera, DLNA capabilities, and the stock version of Android 2.2 (!). Yeah, this phone is sweet.

The G2x is expected this Spring, and while the official press release doesn't narrow down this date, TmoNews seems to think that April 20th sounds probable.

With AT&T's recent acquisition of T-Mobile and talks of having to eventually replace all T-Mobile spectrum phones with AT&T's, you may feel cautious about buying anything T-Mobile branded, but there really is nothing to fear at this time - if the deal goes through, it will take over 2 years for the final details to fall in place, giving you ample time to upgrade to an AT&T device. The G2x seems like a very fair choice on the T-Mobile network at this point. 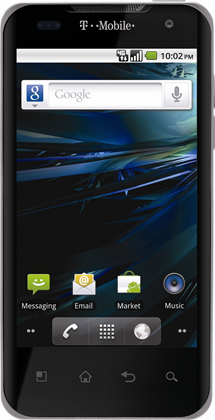 ―More consumers than ever are turning to their smartphones to stay entertained wherever they are with access to their favorite video games, TV programs and more,‖ said Andrew Sherrard, senior vice president, marketing, T-Mobile USA. ―By combining the latest innovative hardware and preloaded content with our 4G network and the power of the dual-core processor, the G2x offers the mobile gaming and entertainment experience our customers crave.‖

―The move into dual-core technology is the next big leap forward in mobile technology creating a new superphone segment,‖ said Tim O’Brien, vice president of marketing, LG Mobile Phones. ―These super-powered processors will allow both developers and users to utilize the unmatched speed and power in multitasking, multimedia and functionality never before realized in a mobile handset.‖

The G2x will keep customers entertained with access to preloaded games and applications, including the following:

In addition, the G2x will include NVIDIA’s Tegra Zone application, which provides quick access to games optimized for the Tegra 2’s dual-core architecture, which is built to handle the performance requirements of mobile games that use PC and console quality graphics features.

The G2x comes equipped with an 8-megapixel rear-facing camera with LED flash and autofocus, and a front-facing 1.3-megapixel camera paired with the preloaded T-Mobile Video Chat application powered by Qik for staying in touch with family and friends. With the phone’s 1080p high-definition (HD) video recorder and DLNA compatibility, G2x customers can capture video and wirelessly connect to a compatible HD TV or other DLNA device for streaming full HD video content or enjoying a console-like gaming experience through HDMI mirroring, taking advantage of the phone’s accelerometer and gyro sensor.

Powered by a stock version of the Android™ 2.2 operating system, the G2x offers access to more than 150,000 applications available on Android Market™ and integration with Google services such as Google Voice™, Voice Actions™ from Google, Google Goggles™, Google Search™, Gmail™, Google Maps™ with Places and Navigation, YouTube™, Google Talk™, Google Earth™ and more.

The T-Mobile G2x with Google is expected to be available nationwide later this spring at T-Mobile retail stores and online at http://www.t-mobile.com.

Apple Sues Amazon Over Use Of 'App Store' Name