Prev
Posts in the last
24 Hours
sorted by
Hottest
Next
Update: After getting a lot of initial press, experts are weighing in and crying foul with the methodology of this study. Apparently the custom app the researchers used relied on Apple's UIWebView, which doesn't utilize recent optimizations made to the actual Safari browser.

We would now consider this study to be flawed at best, if not completely meaningless. We would, however, look forward to a similar test done under conditions that could lead to an accurate measurement.

Web analysis site Blaze has conducted an extensive study to compare the browser loading times of Android and iPhone, and we think most of our readers will be very pleased with the results. In a dominant showing, the Android browser was determined to be, on average, 52% faster than the iPhone's.

Blaze loaded over 45,000 web pages from 1000 web sites (real sites, mostly those of Fortune 1000 companies), using an iPhone 4 running iOS 4.3 and a Nexus S running Android 2.3 'Gingerbread.' Each page was loaded multiple times on different days. Their study used a custom benchmarking app that measured page load time. Stock browsers were used for each OS. While the average speed of the Android phone was 52% faster than the iPhone's, the Nexus S also handily beat Apple's flagship device 84% of the time in head-to-head browser loading races. 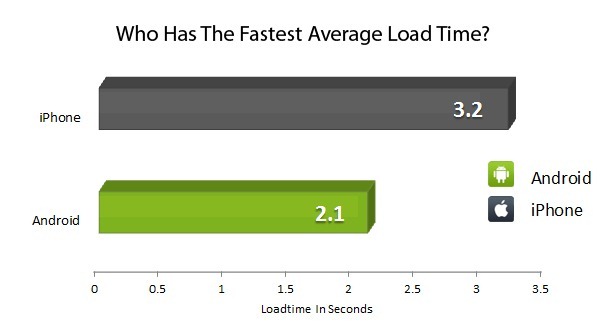 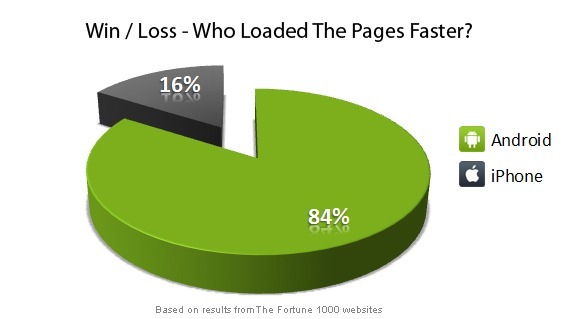 When broken down into a comparison of mobile sites vs. desktop versions, Android's primary advantage became apparent. Mobile versions of sites loaded in roughly the same time for each phone (two seconds on average) but for regular sites, the Nexus S loaded them faster by over a two second margin (2.1 seconds to be exact, compared to 4.3 for the iPhone).

The study also found that faster JavaScript engines, touted in both iOS' and Android's latest iterations, didn't add much improvement in browser speed. Blaze's researchers hypothesized that the "improvements" were largely intended for benchmark purposes and don't actually add any advantage in real website browsing conditions. iOS 4.3 showed no improvement over the earlier 4.2 and Gingerbread showed only a marginal boost over Froyo.

While these results likely comes as little surprise to many Android users, many Apple fans and other less Android-centric smartphone customers may be surprised to hear that Apple's software and hardware do not, in fact, "just work" better in this case. We can only wonder how Steve Jobs will find a way to frame this one as an advantage for Apple when it comes time for his next grand unveiling.

You can head over to the source link for more details about their findings.

Source: Blaze via Gizmodo and Daring Fireball via Network World